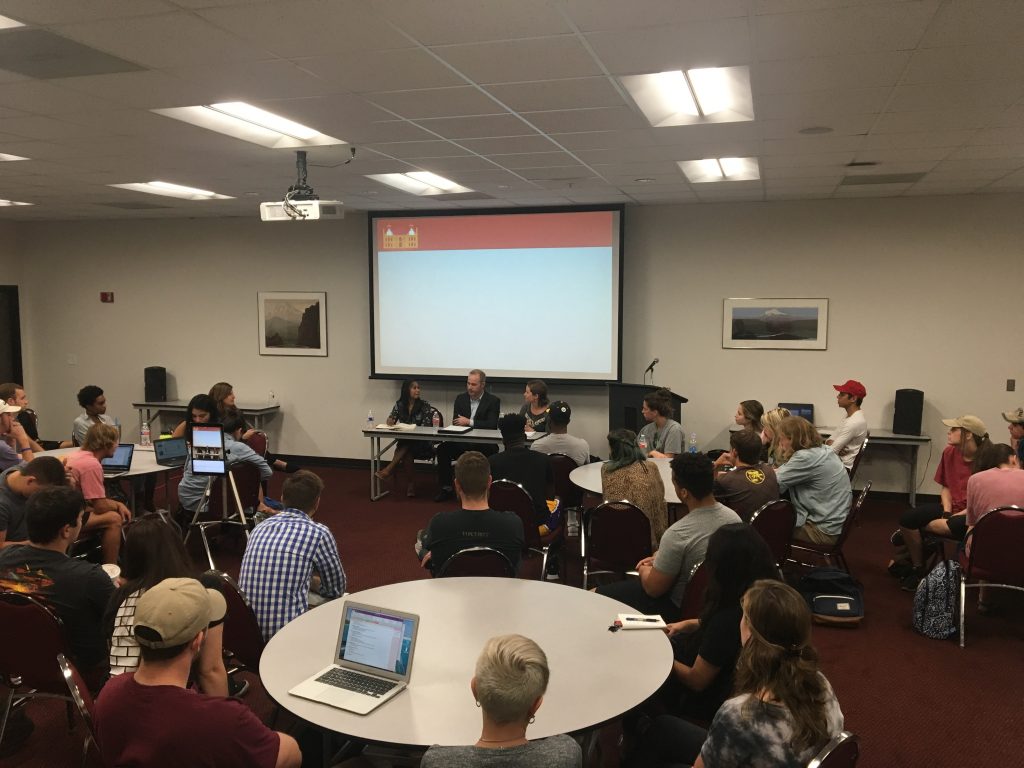 Alumni panel members spoke to a packed room Wednesday regarding their careers in advertising.

The panel commenced with brief introductions of the panel members by moderator Jenny Buschhorn who then proceeded to ask questions on behalf of her students.

Wasting no time at all, Buschhorn asked the panelists what their best advice would be for a student looking to make a career in the advertising world.

Divya Darsi, who graduated from Texas State in 2014, said that her best advice would be to make good use of internships.

Her message to students was to keep trying if they didn’t get the internship they wanted. She recommended requesting to shadow someone if a formal internship didn’t work out. From there, one might see all of the day-to-day affairs and have an easier time narrowing down what it is they want to do.

Senior account executive for Latinworks and former Bobcat Matt Kemp said that staying motivated and passionate is the key to getting started.

Kemp said applying for internships can be tough, but persistence pays off. “If you don’t get your dream internship, apply for the next 10 in line,” said Kemp.

Sabrina Jordan, media director at Austin-based ad-firm GSD&M warned students not to wait until their last semester to start looking for internships. Starting in the junior year is much easier because many internships receive hundreds of applicants. In many cases, returning interns get first dibs, followed by those with relevant experience. Jordan said internships that may not be your first pick can be used as stepping stones to get where you want to be.

When asked how professional advertising compares to schoolwork, the panelists agreed that it was the same kind of work, albeit much more and at a faster pace.

Jordan pointed out that as a student, she had a tendency to jump straight into projects without actually knowing much. As a professional, she noticed she started taking her time to evaluate important factors such as the target audience, medium of communication and message behind a pitch to gain an understanding of the nuances of the project before actually starting on it.

Jordan also said that instead of thinking about her job and what she was supposed to do individually, taking a step back to see where her work plugged into the big picture was what really helped her appreciate what she does.

The panelists also agreed that things move quicker in the industry now than they did in the past.

TV dramas such as the AMC hit Mad Men occasionally portray turf wars within the departments, but Kemp said that there is actually a strong sense of cohesion. He spoke of a conference he attended where everyone was asked to write down things that they disliked about particular departments, and then what they appreciated about those departments.

Kemp said that across the board, specific departments from agencies around the world said the same things about the other departments as everyone else, and it helped him gain a new perspective on his colleagues.

When asked where students should focus their futures, Jordan summed it up with some facts.

In their closing statements, the panelists offered their final pieces of advice.

Kemp said knowing how people consume media is important, but the key is not only great creative work, but great work in general.

“You need to know how to reach the consumer, but it’s not going to work if it doesn’t resonate with them,” said Kemp. “You need A+ work across the board.”

View all posts by Eric Ott