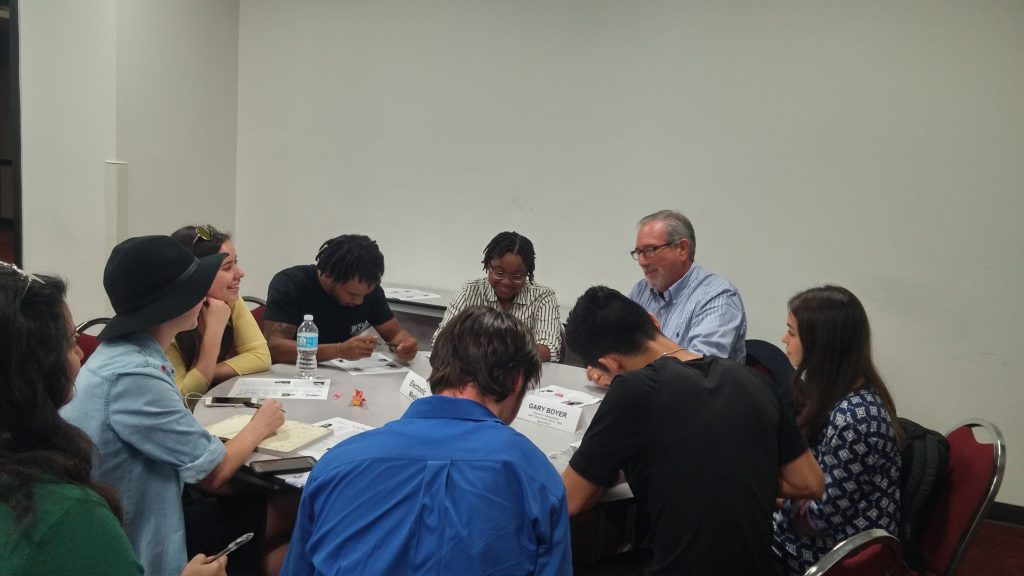 The panel “So you want to be a Mass Comm Professional…” was mostly made up of  Texas State University alumni. Among the alumni included advertising, journalism and digital media professionals. Every speaker was seated at a table surrounded by students who were able to ask questions about what it really takes to be in the profession.

Nicole Barrios, former University Star editor and reporter for the Austin American-Statesman, talked about her daily job duties and the importance of being involved in student media.

“Classes teach you how to do things, but the Star and KTSW let you do those things,” Barrios said.

Barrios said working for the University Star helped prepare her for the Austin American-Statesman.

Barrios said the one thing that really helped push her career was the connections she made during her time as a student.

Grace Mills, marketing director for Mochas and Javas, talked with students about preparing for the real world of public relations.

Mills said the ability to do “whatever you want” influenced her decision to do public relations.

Mills emphasized the need to learn how to work in groups for a profession in public relations.

“Teamwork is a skill you’re going to have to learn,” Mills said. “Be kind, be smart and don’t be manipulative. You need to learn how to work with people.”

Mills said a skill that can set anyone apart from other job seekers is persistence. When sending in an application, be sure to send a follow up email to let whomever know you are interested in the job.

Mills reminded students to never forget who helped them get to where they’re going.

“Don’t be afraid to be a little old fashioned and send ‘thank you’ cards,” Mills said. “Keep the connections you make, they’ll be important for PR.”

Aaron Derton, electronic media junior, said the most important thing he learned is journalists should be as honest as they can.

“Few things are as important as public trust, and honesty in our jobs is a huge part of that,” Derton said.

Derton said he looks forward to meeting with more professionals in the coming week.

Clayton Kelley, electronic media junior, said he wishes freelance journalism was represented in the mix of professionals. Though there was one freelance videographer at the event, Kelley said it wasn’t enough for him.

“I wish there was more freelancing,” Kelley said. “In a way we are all freelancers because we do things outside of the classroom and I wish their voices could have been heard more.”

Kym Fox, associate professor of practice in journalism at Texas State, moderated the event, said she hopes students will realize there are many career options out there, and it’s all about exploring their options.