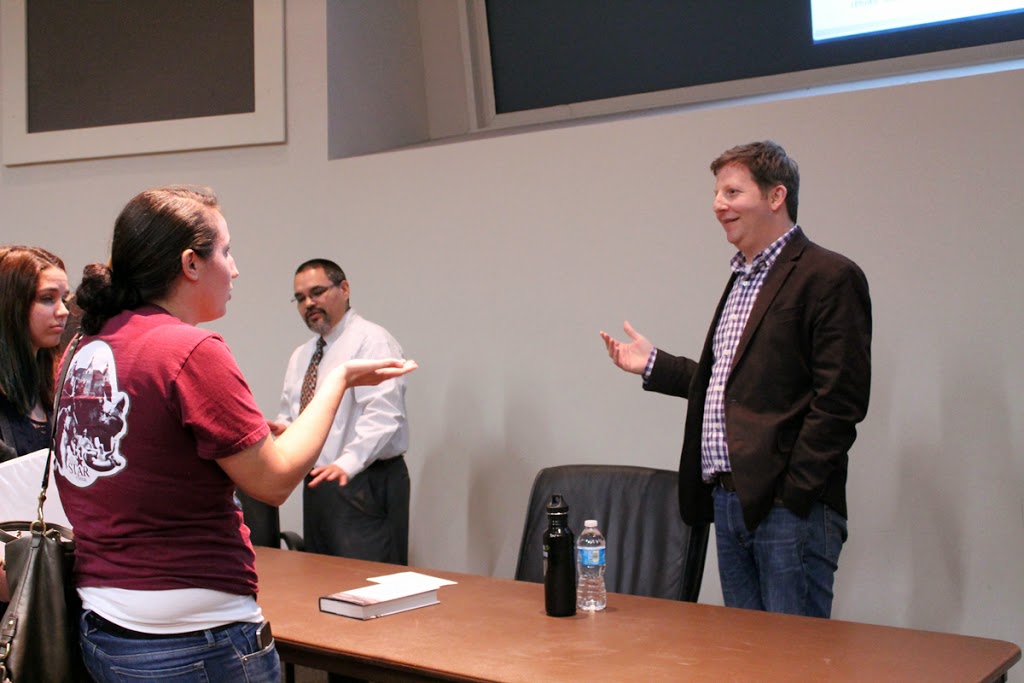 Texas State Professor Gilbert Martinez introduced the man few students had heard of, who in an hour would be discussed all week in the halls and around campus.  New York Magazine writer Robert Kolker flew down to San Marcos to spend the week talking to Mass Comm. students at Texas State about his new book, Lost Girls, which documents the disappearances and murders of five women on Long Island from 2005-2010.

Kolker was extremely open and inviting to all student questions, and Professor Martinez did an excellent job moderating the presentation with his own questions on the entire process: becoming a published writer, getting on with New York Magazine, research techniques, interview tips, and writing a full-length true crime novel for the first time.  Most questions I had as an audience member were graciously asked in advance by Professor Martinez.

Kolker, who is new to writing novels but a veteran of the craft, was as humble as he was informative.

“I’m a narrative writer at heart; I like to tell stories,” he admits.  “Writing about ordinary people, who are caught up in something extraordinary.”

His book, Lost Girls, tells the story of the victims’ families and what they had in common, most of them living along the poverty line.  One student asked how Kolker approached the families, and if it was difficult to not be emotionally swayed as a writer during this process when he grew close to them?

“You want to help people, but also tell a fair and accurate story.  No one’s a hero, no one’s a villain,” Kolker explains.

Kolker’s rise to success was not without rejection and tribulation.  At 22, possessing a liberal arts degree in history, he was turned down from all the magazines he applied to, on grounds of lacking experience.  His solution?  He worked for a small town newspaper to get his start.  Though it definitely took some time to be recognized and hired with New York Magazine, Kolker’s years working a news beat helped him form the skills and habits of a truly good journalist.

“It’s better to be learning and growing in a professional context than to be at a place with a big name,” Kolker said.

On writing a novel…

Kolker spent many months driving out to meet with the families of the missing girls on his weekends off, recording hours upon hours of audio interviews for later recall.  In the interest of saving both time and sanity, he admits to investing considerable money into hiring a transcriber to type up these audio interviews.

“I’m a big believer in the bad first draft.  You can always go back and chisel it down to a diamond,” he explains, rather than obsessing over each chapter and slowing the pace to a point of frustration as a writer.

Another student asked about the process of promoting the book.  Kolker, who was picked up by Harper Collins to publish Lost Girls, admits that even big publishers don’t have the funds to cover all of this.  He had to pay for and create his own website to advertise the book.

The end result is a neatly laid brochure that  explains what the book is about, and features detailed maps showing where the victims were found, to illustrate the chilling proximity and burial patterns of the Long Island serial killer.

The man responsible for praying on the Lost Girls was never found.  The police investigation is still ongoing.

Michael Seabrooke is a senior at Texas State University majoring in journalism and minoring in business administration.  Contact: mcs104@txstate.edu