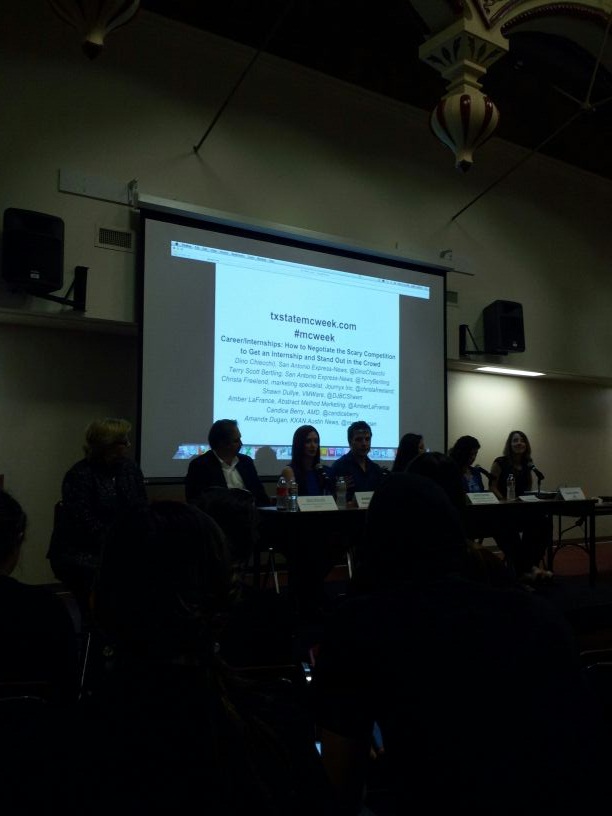 By Liza Winkler
Dozens of students gathered in Old Main Oct. 31 for a panel discussion on the importance of internships, job flexibility and networking in the journalism field.
Dino Chiecchi, administrative editor and editor of Hispanic publications at the San Antonio Express-News, headlined the discussion. He is one of the many leaders who took the stage during Texas State’s annual Mass Comm week to lecture and interact with aspiring media students.
Six other mass communication professionals joined the talk including moderator Terry Scott Bertling, features/niche products editor at San Antonio Express-News and panelist Amanda Dugan, morning traffic reporter at KXAN Austin News.
Chiecchi, who also works professionally as an intern recruiter for the same publication, gave firsthand tips for how to “stand out in the crowd” and navigate the “scary competition” to score an internship. Chiecchi also spoke about his humble beginnings in El Paso and his current ventures in the world of mass media.
“When I was a student at UTEP (University of Texas at El Paso) I had this epiphany that changed my life,” Chiecchi said. “I realized that the farthest east I had ever traveled was Clint, Texas. Clint is about some 60 miles east of El Paso. That’s when I decided I would change this. (Throughout my career) I’ve worked in Austin, San Antonio, Tucson, Hong Kong and the Associated Press in Dallas.”
Chiecchi said he believes students go to school to learn skills necessary for working at their college newspaper. He said students should then utilize the clips and skills from that newspaper to apply for internships, and ultimately use those internship clips to apply for a job in the professional world.
June Leal, mass communication senior, said she will take into consideration the advice she gleaned from the panel when submitting internship applications.
“I really want to go into fashion public relations,” Leal said. “There’s one in Austin that’s a lifestyle PR (firm) and they deal with music, fashion and architecture. Univision would also be really cool, and Clear Communications would also be a place I’d be interested in applying to.”
Jayme Hunter, mass communication senior, said she took many useful tips from the discussion including how important confidence, awareness and networking are regarding internships.
“I learned that being comfortable with yourself and the position that you are applying for is essential in an interview situation,” Hunter said.
Dugan said her calm and relaxed personality on-air did not come easy at first. She said she got her start in Pittsburgh and admits she has learned through trial and error in her internships, which ultimately led to her career in television news.
Christa Freeland, marketing specialist for Journyx, Inc., said she also learns from her mistakes and strives to continually get out of her “comfort zone.”
“Do something that makes you uncomfortable, be okay with failing, and surround yourself with positive forward-thinking people,” Freeland said.