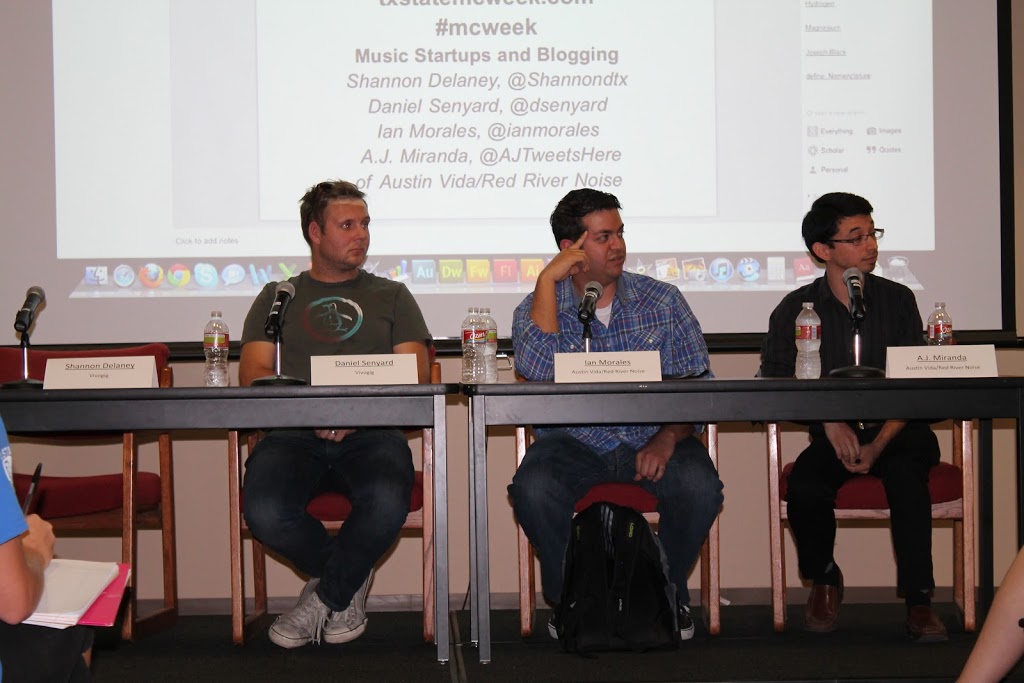 The infinite capacity of music and its influence in the lives of our generation has engrossed the mass media in every way possible. From music downloads, concert notification emails, phone apps, and live streaming websites to the numerous music blogs loaded with interviews, reviews, photos and video it’s everywhere, and there’s no stopping it.

Texas State’s Mass Comm Week 2012 featured a panel of guest speakers consisting of some of Austin’s most stimulating music blogs. The veteran bloggers shared perceptions on the music journalism industry, along with the challenges and merits in constructing a successful blog and/or magazine.

“Music Startups and Blogging” brought together Daniel Senyard and Shannon Delaney of Vivogig, along with Ian Morales and A.J. Miranda of Austin Vida/Red River Noise.

Vivogig is an Austin-based live photography platform that allows fans to post their own photos and footage from concerts they attend. CEO Daniel Senyard releases a podcast every week of the various musicians and bands he interviews with fan-submitted questions.

Editor-in-chief Ian Morales and multimedia editor A.J. Miranda cover the Latino culture in Austin, Texas, in Austin Vida/Red River Noise, and how it impacts entertainment in what’s known as the “Live Music Capital of the World.” Morales explained how the generations of Latin-Americans are straying away from the roots of the Latin culture. The small following of Latin music in Austin is a consequence of “the human tendency to not get into the unfamiliar,” said Morales.

The panel covered topics ranging from internships to compensation with the humble truth. Morales explained how the first three years of Austin Vida/Red River Noise was created merely by the “labor of love.” The process of paying off debts and organizing the newborn publications put a hold on compensation for writers and photographers. The entrepreneurs paid mostly out of pocket for their ambitions, but for good reason. Their success has brought upon contacts, skilled writers and photographers, combining “labor of love” and compensation into one happy couple.

Readers and numbers play a big part of any mass media output, but the focus has always been on two key elements: to inform, and to involve. The World Wide Web is undoubtedly a crucial aid to the mass media for our generation, and through the vast amounts of information continuously traveling all around us fortunately music still sticks to the air.