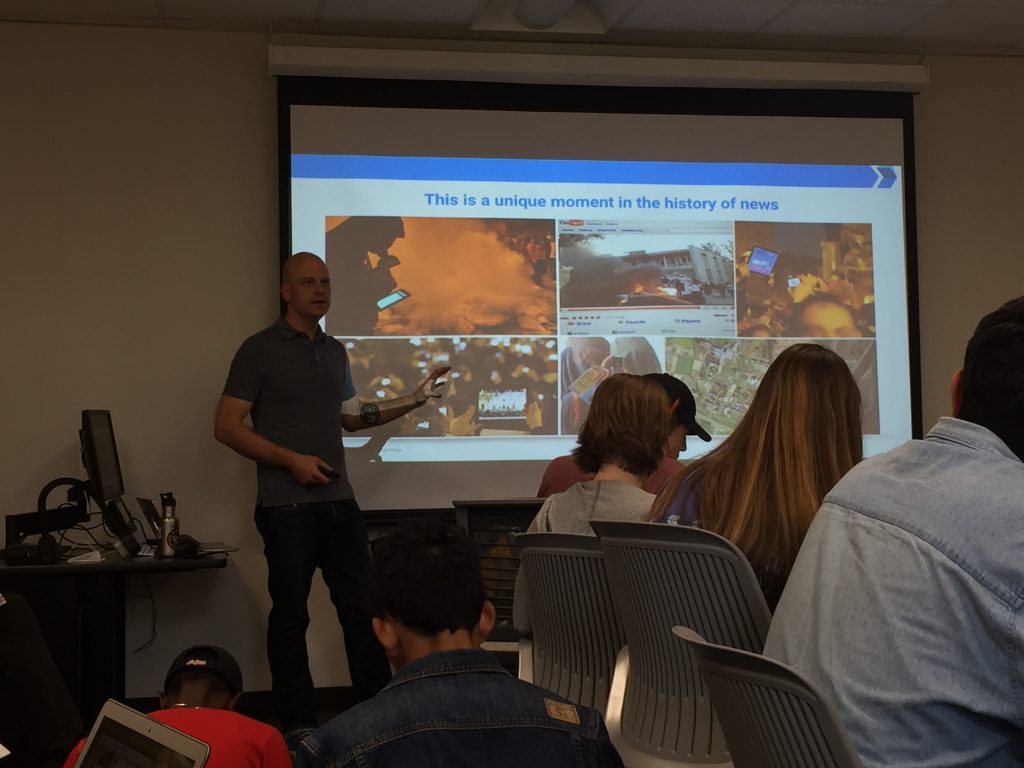 Dozens of mass communication students filled a media innovation lab at Texas State Tuesday afternoon to learn from a Google News Lab manager about the intersection of journalism and technology.

Although the number of students outnumbered the chairs in the room, the students remained attentive as Google News Lab Training and Development Manager Nick Whitaker informed them of ways to use data as a tool for immersive story telling.

“Our team is really focused on making the future of journalism an easier path,” Whitaker said. “We get the question quite a bit like, ‘what is the point of the news lab?’ and ‘why do we exist?’ And I think it goes back to our original mission which is to organize a world of information and make it universally accessible, which is really the same job journalists have had, in a way, before Google even existed.”

Whitaker used the workshop as a platform to tell students about data resources offered by Google that can help them, as mass communication professionals, do their jobs. He demonstrated that Google Trends can be useful to content creators when learning how their audience searches things on the internet.

“I’m very happy with my choice to come to this workshop because I learned about programs that Google offers that I didn’t know about before,” said Mariah Simank, public relations senior. “I think that Google Trends and a lot of the programs that Google is using right now I can apply to work for present clients and future clients in terms of narrowing down search results and catering our content to them.”

In addition to programs like Google Trends, Whitaker showed students how they could use the Google News Lab to learn more in-depth about how to translate the website’s readily available data into visual representations that could potentially make their content more immersive for consumers.

Journalism sophomore Lesly De Leon said she’s excited to implement what she learned at the workshop into her reporting.

“It was really cool,” De Leon said. “Especially just learning how to narrow down searches in Google, I think that helps you when researching for stories and gathering the data available online. It’s interesting the way Google makes data available because it makes it more approachable for people who don’t exactly know much about it but want to learn. It’s like a stepping stone.”

“The most interesting thing is that really these awesome speakers, they are young, they are bringing the latest, and they are really stressing what we’re telling the students in the classroom,” Wilson said. “This speaker in particular was really awesome to me because he gave students the tools on how to do better research.”

Whitaker said he has been involved in Google News Lab’s training of more than 40,000 journalists across 38 different countries in hopes of bridging the gap between journalism and technology to ultimately foster a more informed society.

“The key here I think is creating a more informed world, and that really takes journalists and technologists working together,” he said. “And in a nutshell that’s why I’m here.”

View all posts by alh157