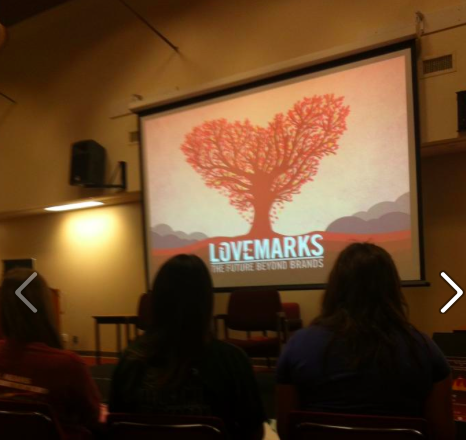 Mily Hernandez spoke about advertising in new media at 2p.m. on Thursday in Old Main for Mass Comm Week.

The audience was composed of high school students from Laredo and Texas State students majoring in
mass communications. “I thought it would be interesting to see how advertising applies to multiculturalism, and how people use their brands to depict that,” said Paige Brady, a public relations student.

“I came because I wanted to learn more about advertising versus public relations,” said Kaitlyn Barrett, a mass communications student. “I still haven’t picked my concentration.”

Hernandez works for Lovemarks, a branch of Comcast in Puerto Rico, which advertises by appealing to human emotions rather than listing benefits of a brand. “People are powered by emotions, that’s why Lovemarks are important,” said Hernandez. Lovemarks use mystery, sensuality and intimacy to turn a brand into a relationship.

Mystery involves personal stories that consumers relate to an advertisement. Advertisements that appeal to the past, present and future are essential to a Lovemark, because those brands go with a person through life.

Sensuality refers to the use of sound, sight, scent, touch and taste to make a brand relatable. “A champagne bottle opening- it’s a sound that you will always remember, it means a wedding, a celebration. And that stays with you,” said Hernandez.

Intimacy means that a brand has been with someone through it all. The consumer is committed to the brand because it makes them feel a certain way.

Hernandez used the Puerto Rico market of Toyota as an example of a company with a typical advertising plan that was turned around with Lovemarks. In 1992, the company advertised by reporting their prices and features in the newspaper. Hernandez’s company wanted to turn Toyota into a Lovemark, focusing on the emotional appeal of being well made.

Television became the primary media for Toyota, and a social commitment to the environment was established. A crisis management strategy of transparency, proactivity and fast action kept Toyota on top through good times and bad.

Kirsten Peek is a junior journalism major at Texas State.

One thought on “Lovemarks: Brand development for a long-term relationship”