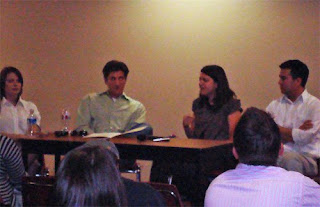 The hot topic of conversation was internship. All four alumni said they had one or more internships. Mike Vela and Katie Mullins Cook had an internship with an organization that lead them to a job with the same organization.  All members of the panel stressed the importance of obtaining an internship.
“For some reason the students today do not have internships,” said Emily Shaw. “My advice is if you want a job in PR you have to have an internship; it is very critical.”
“Start early and do as many internships that you have time for,” said Cook.
The panel also discussed the importance of networking. University organizations such as Bobcat Promotions, PRSSA and Ad Club were mentioned as great way to learn and network.
“Networking and social networking are very important,” said Patrick Quinn. “The social network LinkedIn is a great way to find jobs and get recommendations.”
Vela said that cultivating relationships was key to learn, especially in non-profit organizations. You have to keep in touch with many people, particularly stakeholders, because you will need those relationships in the long run.
The panel then went on to talk about the work that is expected in the PR/Ad business.
“It’s OK to be creative and write differently then how you were talk in school,” said Shaw. “Don’t be afraid to think outside the box. Communications is different for everything we do, there is not one certain way to communicate.”
“Every five ideas you have there will be one good one,” said Quinn.
“Be able to take constructive criticism,” said Vela. “Every company has there own way in writing press releases, the first time I wrote a press release for the Children’s Shelter I wrote it wrong.”
“It’s all about continuing your education; read more, take some more classes,” said Cook.
The final conversation was about the the upcoming graduates and what it will be like trying to find a job.  Shaw mentioned that the economy is going through a rough time now and that it won’t be easy to find a job in the Austin market.  She would like to hire the great students that come in for a job but just cannot because the market for PR is tough right now. She said that it should get better in 2009.
“Start looking for a job a month and a half before you graduate,” said Vela.
“Doing research on a company that you are inquiring shows that you really care,” said Cook. “Also understanding what is going on in the world; it is helpful to know current events.”
“Be ready for a marathon when interviewing,” said Shaw. “I once had an interview that lasted five hours.”
“Make the job of the person who is interviewing you as easy as possible; come prepared,” said Quinn.
The panel was very informative for those students who are planning on finding an internship or job in the near future. It really was helpful to get the alumni’s point of view. Mike Vela, Emily Shaw, Patrick Quinn and Katie Mullins Cook did a terrific job in informing the audience of what to expect after graduation.  There are probably many students who are now more motivated to get out there and find an internship in order to gain the experience needed for a profession in the PR/Ad industry.