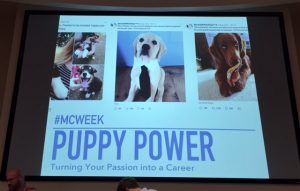 Pursuing your passion does not always have to be difficult, it just takes time and dedication. College sophomore Matt Nelson realized the importance of pursuing his passion in comedy when he begin his Twitter account two years ago on November 15th.

Now, founder of “We Rate Dogs”, Nelson’s Twitter account has over 3.7 million followers with 120,000 likes. “We Rate Dogs” is an account Nelson created to test his comedy to rate photos of dogs in under 140 characters.

Nelson started using Twitter just as a personal outlet, to communicate with followers to see what they were interested in. “I’m so addicted to making people laugh” Nelson said. Pretty soon he recognized that dogs were hot on Twitter, so he used dogs to build his passion through connecting with his audience. Through trail and error, Nelson found his voice and found what his audience’s interests were.

Nelson kicked off Mass Comm Week at Texas State Monday with his panel “Puppy Power: Turning Your Passion into a Career” at the Alkek Teaching Theater.

“I came to this panel for my FDOM class, and I’m glad I did” said Melanie Reynolds. “I think it’s so cool that he started this himself honestly.”

Another attendee, Lexie “Alex” Gibbs, says he left his house to see Matt Nelson’s panel today. “Before I came I was honestly watching Harry Potter, and I came to campus to learn more about Puppy Power!”

With Nelson’s account getting more famous, the responsibilities grew. He gets around an overwhelming 1,000 photos a day. Tyler Macke, an entrepreneur, now helps Nelson run his business and his new store Shop We Rate Dogs. Nelson’s business now generates around $10,000 a month.

While success happened fast for Nelson, it wasn’t possible without a lot of time and effort. Nelson quit school and his job to pursue his passion in making people laugh. “It was not easy to ditch school, but I knew pretty early on that this was something I was passionate about.”

Nelson’s first book was released on October 3rd, and there’s a chance of a calendar deal coming up in the near future.

“My advice to Mass Communication majors would be to find your voice, and recognize your passion.”

View all posts by Jessi Spain