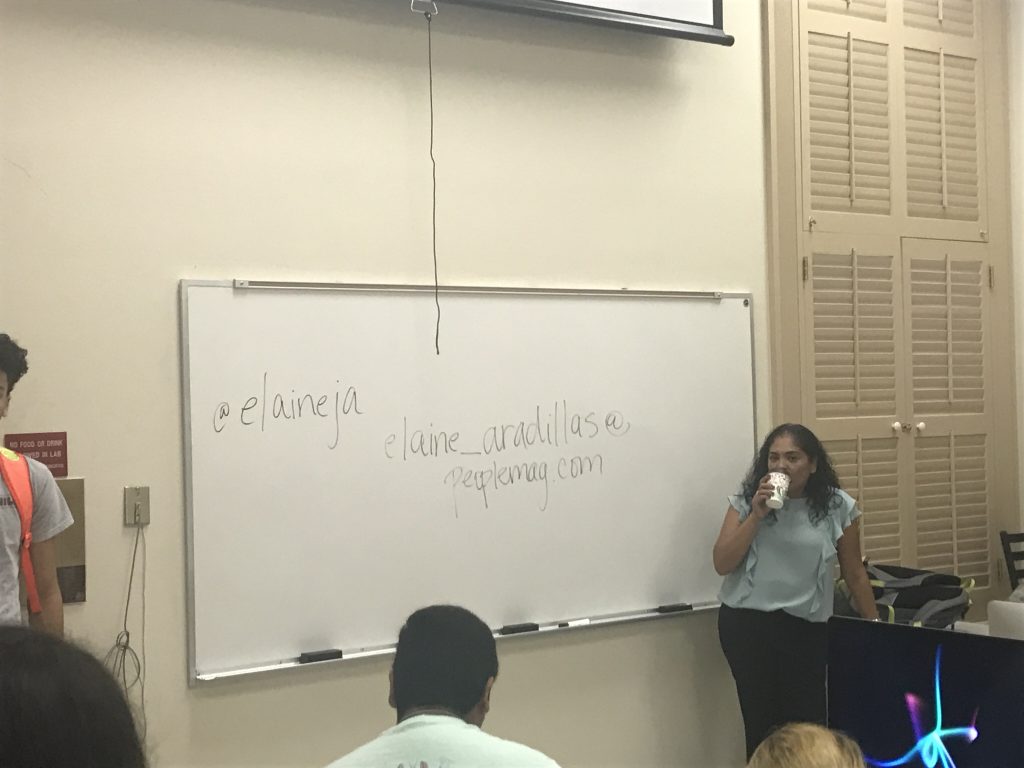 SAN MARCOS – Crime reporter for People Magazine, Elaine Aradillas met with students and faculty at Texas State University to discuss how she came into her position from her beginnings in Texas.

Aradillas offered advice to aspiring students and explained how different events at her various jobs led her along her career path from an intern at the San Antonio Express News to People Magazine. According to Aradillas, crime reporting is an entry level job where a reporter can learn the who, what, when, where and why.

Starting with her first story covering a fatality, she was called by her editor to cover an automobile accident in which the driver was decapitated.

“My first dead body I’m like completely freaking out,” Aradillas said. “I was just like ‘oh my god, but I need to keep doing this'”

From there, Aradillas revealed various stories she had covered, including the Ferguson riots, Ariel Castro kidnappings, and even a detailed story of girl who was a witness to the shooting at the Aurora Theater in Denver, Colorado.

After receiving her degree in journalism and interning at the New York Times, she got a job at the Orlando Sentinel. In her two years at the Sentinel, Aradillas spent her time gathering what she described as the “five best clips.”

“Write the five best stories that you can possibly write so that you have new clips; because no one wants to see old clips from you,” Aradillas said.

After meeting with the editor with Time Magazine, she got a job at the L.A. offices of People Magazine. In her new position, she was tasked with the celebrity beat where she gained a deeper appreciation for her original focus of crime reporting.

When she finished her presentation, she offered to answer the students’ questions.

“When you’re dealing with those stories,” a student asked. “How do you take the emotions out of it?”

Aradillas answered that it is necessary or else she wouldn’t be able to do the job properly, even though she does sometimes succumb to the emotions later.

In another question, a student asked what advice Aradillas had to offer high school students to become better writers.

“You’re one step ahead to be able to communicate,” Aradillas said. “That is a skill that is valuable and practice that.”

View all posts by ema42