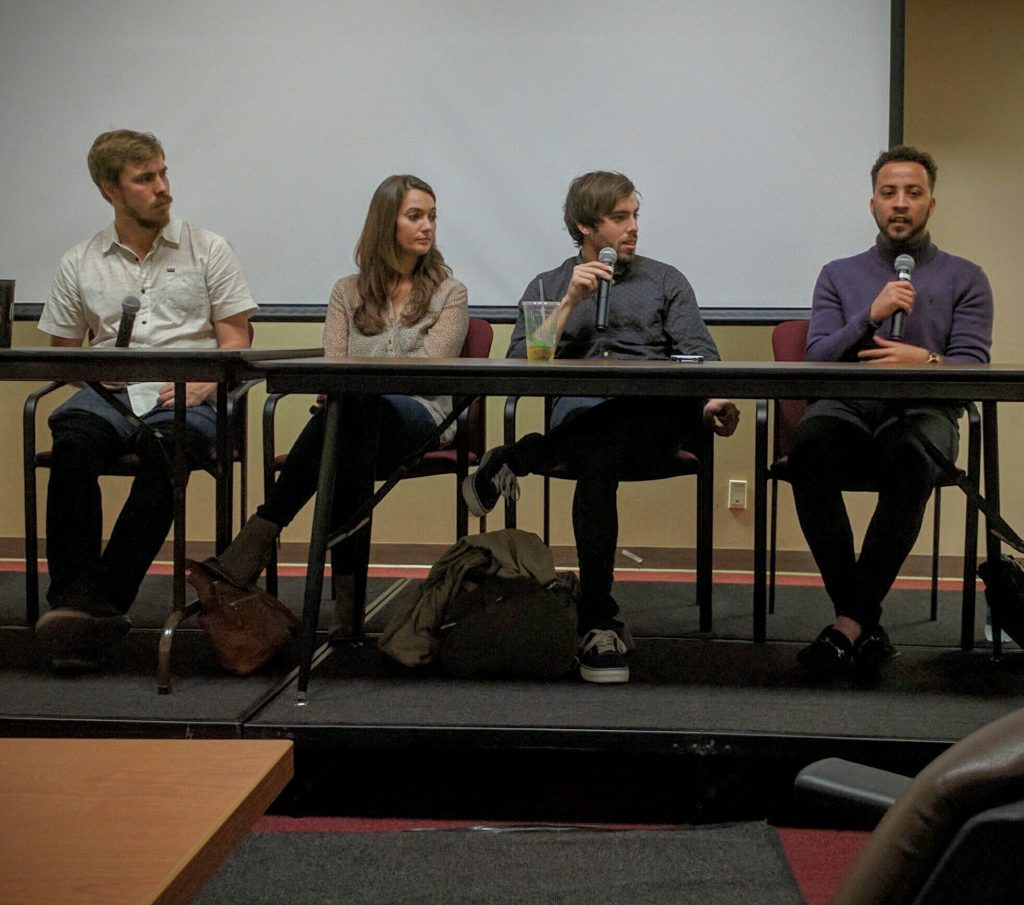 The former Bobcats began the panel by discussing their background and current job descriptions.

With backgrounds in electronic media, public relations, social media and mass communication, none of the panelists expected a career in web development post-graduation.

Cindy Royal, school of journalism and mass communication professor, said the panelists took only a couple of classes in the field in which they are now working.

Slade said after graduating last December he began to search for a career that would be a challenge to him. Slade was also a former student of Royal’s web design class.

“I had no knowledge of coding or anything like that,” Slade said. “I took web design and just immediately fell in love with it. I loved how I could go outside of the class and kind of learn on my own.”

Cook said with her public relations background she never imagined herself as a web developer.

“I was actually a PR (public relations) undergraduate at Texas Tech,” Cook said. “And not many digital classes were offered, so after I worked in PR for a little bit I came and I found this program interesting.”

“It’s really cool,” Hernandez said. “They’re working in technology but with mass comm (mass communication) degrees so I was able to see all the different things I could possibly do one day.”

The panelists gave advice to those seeking careers outside of mass communication fields.

Adriana Sanchez, communications sophomore, said knowing the panelists were once in her shoes helped her make a connection to them.

“I like that they were us not that long ago,” Sanchez said. “It’s nice to see how some people from Texas State get so successful.”

Cook said employers don’t only look at candidates work skills but also at their personalities and tenacity.

“They think about whether or not they want to work with you every day,” Cook said. “Sometimes it isn’t just about the skills you have.”

“They answered a lot of my concerns,” Jones said. “I like writing but web stuff is something I thought about after taking media design as elective.”

Garza said panic and anxiety will always come when asked about his first months at WP Engine.

Problem solving and situational questions were common during his hiring process, said Slade.

“You have to know how to solve problems and not get overwhelmed,” Garza said.

Cook said she continues to learn new things every day at her current employment.

Hodge said there has to be a passion in the work field but to not sell oneself short.

“I love my job,” Hodge said. “I go home and work on my projects but don’t be afraid to negotiate yourself.”

Networking is an important skill to take advantage during college, Slade said.

“Every person you come in contact with, try to make an impression,” Slade said.

View all posts by dec85