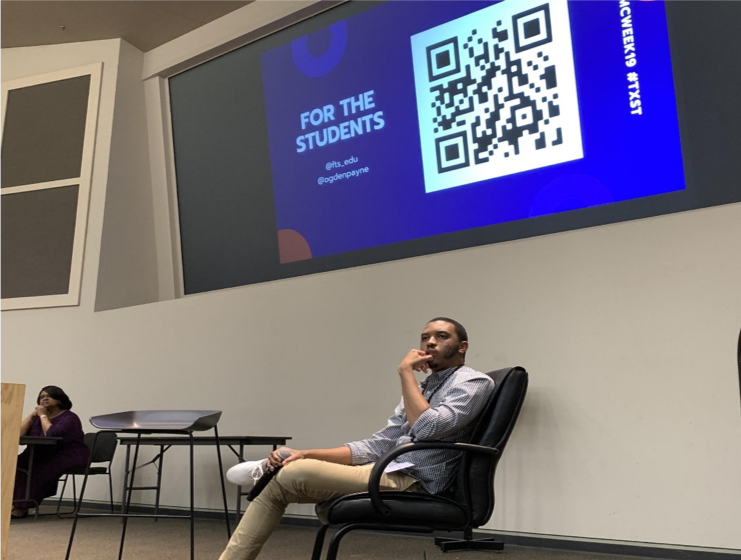 SAN MARCOS, TX – Kicking off Thursday morning during Mass Comm Week, Ogden Payne told students how he landed a career in the music business and how they can too.

After graduating with a bachelor’s in mass communications at Texas State in 2017, Payne knew he wanted to do something in the music industry. He had already been a contributing Hollywood & entertainment writer for Forbes magazine as an intern for almost two years.

Alongside his teammates, Payne created the For The Students program in 2017, which is a college speaking tour designed to educate students who want to pursue careers in the music business.

Payne said it was tough at first to see not many people showing up to events.

“I couldn’t look into the audience because my heart was shattering, and I decided from that point forward we’re never going to have an empty event again,” said Payne. “And we didn’t. Since then we’ve consistently brought out at least 130 to 200 students since.”

For The Students focuses on careers such as artist & repertoire, public relations, marketing, managing, etc. Payne said they want to eventually start doing catered hands-on workshops. The program has recently been doing touring panels, live Q & A sessions, and networking with professionals.

“People typically have fallen into managers, or concert promoters. We’re trying to figure out what you want to do in the industry. In the beginning we just wanted to see if there was an appetite from other people,” said Payne.

Payne explained the importance of his internship at Forbes and how it helped him network with others and realize what he wanted to do in his career.

“Forbes definitely came through and set the tone and foundation for For The Students. Without the relationships that I built through Forbes, For The Students would not have existed,” said Payne. “I took the opportunity and ran with it, and it all started with a cold email.”

He had different ambitions at first.

“I told my mom I wanted to be a rapper. She was like ‘OK, where are you going to work?’” said Payne. “Before [Forbes] I was very much trying to figure out what my path was going to be. Yes, I wanted to do music, but Forbes came in and gave me the confidence and at that point I was like OK I’m good at something.”

Pedro Villa, an international relations major, said he was relieved by the questions people had for Payne.

“It’s nice to hear that not everyone has it figured out yet. I mean everyone is here at this event trying to get information and advice from an actual alumni from our university,” said Villa. “I think what I really took away from this session is networking is really important.”

Another student in attendance, freshman mass communications major Vanessa Siegrist, said she was looking forward to the updates to the program.

“I hope they start doing workshops soon. I definitely don’t know what I want to do with music yet, but I know it’s something. Getting to work one on one with a professional is exciting. Scary, but exciting,” said Siegrist.

Payne says having live events really help him and his team structure their program.

“Sometimes we don’t have that outside perspective. We always want to know what you guys are interested in.”