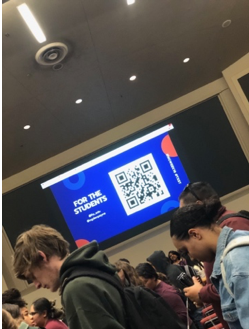 SAN MARCOS, TEXAS—Texas State University hosted Forbes writer and founder of For The Students, Ogden Payne, to speak with students in Centennial Hall Thursday morning to discuss how to land a career in the music industry.

Payne was invited to speak on campus as part of Texas State’s Mass Comm Week, a five-day conference featuring guest industry professionals representing various career fields in mass communication. These events are open to all Texas State students and faculty.

The 387 seats in the Centennial teaching theater were nearly filled at 8 a.m. to see Payne speak. Aspiring artists, managers, producers, engineers, and publicists were thrilled to gain advice and knowledge on how to kickstart their careers.

Public relations major, Becca Pierce, 21, said that seeing Payne speak was the only event featured in Mass Comm Week that she was excited about this year.

“I feel like jobs that branch together mass comm and music are always overlooked,” said Pierce. “That is the main reason why I have been struggling in my major so far. There are always so many opportunities to get mass comm jobs in sports or politics, but I’m not interested in any of those things. I’m really excited to finally see the spotlight put on music industry careers.”

Payne spoke on how he initially wanted to be a rapper but was steered in the direction of journalism after he connected with a writer from Forbes who encouraged him to write from the perspective of an up-and-coming artist. This led him to secure his own job writing for Forbes.

He said aspiring music artists should be more open minded to the idea that there can be more than one way of being an artist.

“I didn’t necessarily want to be a journalist,” said Payne. “The opportunity just kind of fell in my lap and I ran with it. It’s really about being as open as possible to all of the different opportunities and all the different ways you can be an artist while still remaining true to your creative self.”

Payne also spoke on how and why he started his organization, For The Students, a college speaking tour where Payne and other members of his organization instill the knowledge and tools young adults need to be successful in the music business.

For The Students plans on having a music business camp at Texas State exclusively.

“We are definitely planning on doing a camp for college students,” said Payne. “I just wanted to make sure the appetite was there. We did a week-long camp for high schoolers, but I understand that schedule doesn’t work for college. We may have to do a weekend or a few days during the week in the evening.”

Students left the seminar pleased with Payne’s words of wisdom and excited for the opportunities he plans to bring to Texas State. Marketing major, Paul Ward, 19, said he was intrigued and will contact Payne directly for more details.

“Payne reminds me a lot of myself,” said Ward. “I also wanted to rap. Don’t we all? But I recently found interest in promoting my friends who are up and coming artists. I think I am going to email Ogden to learn more about what I need to do to build my connections. Much more insightful than I had expected. I’m glad I got out of bed.”