Director of Chicago Portfolio School concluded Tuesday’s events for Mass Communication Week, speaking about how to get a good job in the advertising field.

Jeffrey Epstein graduated from the University of Michigan with a degree in history. Although his major didn’t have anything to do with advertising, he was always fascinated with the subject. His career with advertising has led him to venture into  several major markets like Detroit, Chicago, and New York City. His journey has brought him much success, even winning a Webby Award, which is considered to be “The Oscars of the Internet”.  Epstein is currently the director of Chicago Portfolio School, helping students build portfolios to display to their future employers with hopes of getting the job of their dreams.

Epstein went over various topics on how to get a good job in the advertising field; some that were obvious and others not so much.

“Don’t look for a job in ‘public relations’ or in ‘ad’,” said Epstein. “Don’t look because it’s too broad.”

Narrow your search for a job by specifying what you want to do. There are multiple jobs within an advertising agency. You could work in analytics, as an account planner, be a web designer, etc. There are several choices to choose from, but once you make your decision, stick to it and hone in.

Epstein emphasized on being digital, and no, Facebook doesn’t count. Get involved with various digital applications, such as LinkedIn and Vine, and make your presence known. Do as much as you can and familiarize yourself with the latest trends and jargon. The possibilities are endless in the digital world.

“I feel the most important things to know is what you don’t know,” said Epstein. 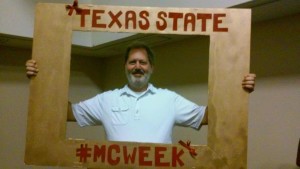 Get involved as soon as you can. Start things. Do things. Invent things. When you make things, you show agencies that you get it, explained Epstein.

Being a nerd isn’t a bad thing either. Get in the know of things and understand what’s going on around you. Epstein makes it a daily routine to look at different websites like Designmodo, New York Times Media News, and Awwwards, which helps him keep up-to-date with the latest news.

Epstein ended his presentation with letting the students know that everything that they do does count. Get your portfolio together and make sure there’s an A+ effort on your behalf because ad agencies won’t work with mediocre. Your resume should be simple. Employers don’t want to flip through multiple pages of a resume. Condense your information. Grammar and spelling can also make or break your resume. Epstein shared a story about one of his former students getting an offer retracted for bad spelling.

After the Q&A panel, I had the chance to speak with ad major Ana Zuniga who enjoyed Epstein as a speaker.

“He wasn’t just spitting out stuff, but he actually had proof,” said Zuniga.

Zuniga thought that Epstein’s advice on being a nerd was great. She explained how it was refreshing hearing his perspective in contrast of the common notion of being social. Most people tend to rely on networking and speaking to people as key to getting a good job.

Breonna Ruffin, also an advertising major, thought that Epstein was genuine. Ruffin aspires to be an account planner and took a lot away from Epstein’s presentation. From all the aspects Epstein touched on, Ruffin took note of having an online presence, which she hopes to tie together with the blog she is currently working on.

View all posts by Adrian Sandoval