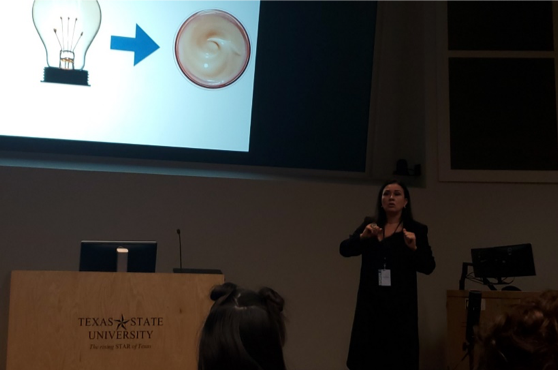 SAN MARCOS — Norma Lujan, a business woman who has worked in many positions, was the keynote speaker for Innovation for a Cause and shared her background and advice for working in the advertisement field.

Lujan first shared her background, saying she was from Chihuahua, Mexico. At 16 she moved to San Marcos to attend Texas State University, where she received her Bachelor of Science in Advertising and Mass Communication[MOU1]  in 1999. After that, she attended The University of Incarnate Word in San Antonio and received her Master of Arts in Administration.[MOU2]

She further explains that she is a former ballerina and enjoys studying foreign languages and indigenous cultures.

Lujan has worked as an operational marketer, new product developer, and public relations coordinator; she has also worked in branding, trends, and shopper marketing. Working for companies like Mary Kay, L’Oreal, Avon, Unilever, Ales Groupe, and Y&R, she has learned to adapt to different positions, environments, and people.

Lujan has learned to take pieces of all her positions and tie them all together to sell products she represents. After working different types of positions she said, “I’m a marketer, but I feel like I am an innovator.”

Since Lujan has worked positions that have dealt with different sides of product sales, she says her favorite part is when she focused on the specifics.

“You have to be in tune with your senses,” she said. “I’m like a green chameleon that adapts to the environment.”

During her lecture, Lujan made a point to explain that life changes. After leaving the corporate world for a time, she decided to start her own style company, Libellule & Lavande, take a year-long sabbatical to Italy, and start holding talks for women to promote the importance of personal branding.

After this, she explained that she returned to Mexico, where she and 37 indigenous women developed Xapontic, a soap which was made to give women a chance to be independent.

After talking about her background and work success, she made a list for the audience that was the “Secret Sauce” for her success that she wanted to share.

Her first few points are to be resilient, persistent, and interesting. Lujan says that being resilient and persistent forces others to see your effort and being interesting shows how much you can contribute.

Julianna Keeton, a digital media innovation major, said “being resilient and persistent can be really useful, but I know it will be difficult for me since I am personally someone who keeps to myself.”

Lujan’s next few points are to be a team player, negotiator, and a listener. She says to never accept a “no,” instead negotiate, so that the “no” can become a “yes.”

Lujan’s most stressed point, was to have a mentor. Throughout the talk she has said multiple times that students should talk to advisors, teachers, and counsellors to receive any and all opportunities possible.

Marisela Ramirez, and advertising major, said personal presentation, personal branding and open-mindedness is what interested her the most from Lujan’s lecture.

The last 15 to 20 minutes of the lecture was open to questions from the audience. One member asked Lujan how to discover a passion, which she said, “the things that you do effortlessly, that’s it.”

After a few more questions, when asked about how to keep a passion from dying, she said she never had that problem. She said she realized that working for agencies wasn’t interesting to her after a time, so she moved to the client side of the business and enjoyed it. She wanted to stay in the field, but there are multiple jobs in a field. “Don’t let your spark die,” she said.

While closing the questions portion, Lujan gave her best wishes to the full Centennial Teaching Theater. “The most important things in a career are things that are not in writing,” she said.