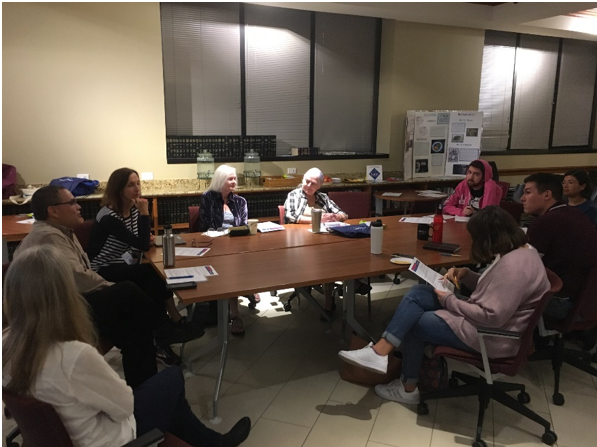 A 1950’s Movie with a Modern Discussion

A diverse array of students gathered at the university philosophy building to watch and discuss a movie about rape, murder and the truth, Monday evening.

Rashomon, which premiered in 1950, is a Japanese movie about four different testimonies about the murder and rape of a Samurai and his bride. The movie delves deep into the human understanding of truth and presents the audience with a task to shift through the characters’ memories to make sense of the events which led to the Samurai’s death.

As people entered Comal 116, they were given a handout with questions to think about as they watched the movie.

“When you watch this film, imagine yourself a journalist trying to make sense of the different versions of the truth. How would you report this story? What’s true, and what’s not,” reads the handout.

Students took their seats, crinkly opened their popcorn snacks and prepared to take notes. Many story elements change as a woodcutter, bandit, bride, and the dead Samurai (via a medium) testify. Throughout the stories, two elements remain the same:

The way these events occurred is up to the discretion of the audience.

The panel discussion with Martinez, Bell-Metereau and Carson started immediately after the movie. Martinez opened the discussion by getting the audience to think about how lessons from Rashomon transfer to modern-day. The room sat in silence for a minute.

“This movie really highlights how different senses can be tested… but there are commonalities that we can find,” said Christopher Hall, a graduate student in philosophy.

The students and professors continued to discuss how the characters’ told stories that seemed to be self-serving. The room then added that people may naturally paint themselves in a light that makes them look innocent. This got the audience thinking about how often stories are told out of self-interest and how are we supposed to view these “truths.”

Martinez first watched this film 30 years ago. Watching it with his students now keeps him young and helps provide him with different perspectives that pertain to more current events, he said.

“Journalists face this every day. Everyone is telling a self-serving story,” he said.

It leads the room to wonder, how do you tell a “true” story?

“Because of fallibility, we are not infallible. Once we acknowledge that, where do we go from there,” said Carson. “Truth is connected with language. The ways we describe it are all fallible… but you can try to get closer to the truth.”