Tuesday at 8 a.m., during Texas State University’s Mass Communications Week, Ana Toro visited students to give a presentation on the importance of multicultural public relations.

The classroom was full of Mass Communication students who were eager to meet and hear what Toro had to say. As the students all got their seats, Professor Grace Capwell, public relations professional and lecturer, introduced Toro.

“Ana Toro is a senior account manager for ICF Global and is a multicultural expert focusing on health crisis P.R.,” said Capwell. “She has worked for the Government, pharmaceutical companies, as well as Fortune 500 companies.”

Toro started off by talking about how she got in to the position she has. She moved to the United States from Puerto Rico where she started working for a PR firm. She said that she felt very out of place there since everyone was American so she started making a stand for herself and soon after that she was sitting at the table with the head PR people, making speeches that were targeted for the Hispanic audience.

“You can not go to your next job and do what they tell you, do more,” Toro said.

Toro then began to talk about how minority groups are not considered minority anymore and PR firms need to realize that when targeting an audience. She put up a slide showing that there are 45-million African Americans, 18.2-million Asian Americans, 5.2-million American Indians, 8-million Gay/Lesbian/bi-sexual/Transgendered Americans and 54-million Hispanics in the United States today. Each of those groups has smaller subsets within them such as religion, language, gender, age, etc. She told the class that it is huge to understand these audiences and important to become a multicultural communicator.

Toro then began showing the class examples of campaigns she has done. She started off showing the National Diabetes Education Program that she helped with. She focused on communicating to the Hispanic population in the U.S. to help them learn good health habits that could save their lives. Toro showed the classroom healthy recipe books that were English-Spanish books that practically flew off the shelves and so they made recipe cards and posters because they were cheaper to make.

Toro wanted the students at SJMC to know that there are many diverse cultures in America and we have to pay attention to each one in order to be an expert. In her case, paying attention to the different minorities has allowed her to communicate healthy habits with thousands of people who might not have had access to the message before.

“I thought Ana was really inspiring,” said Moreland. “I’ve been studying P.R. for a few years and am even doing an assignment on target audiences right now and never thought about how important it is to get to know the multicultural audience in that depth.”

Another senior public relations student, Emma Page, has been thinking about going into the health communication field. She said that Toro’s presentation has helped her understand the demand for communicating with the Hispanic population.

Toro had another presentation at 11 a.m. and would like to talk to students more about her passion for multicultural P.R. 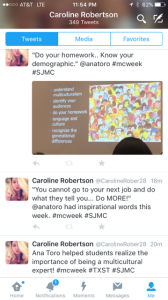