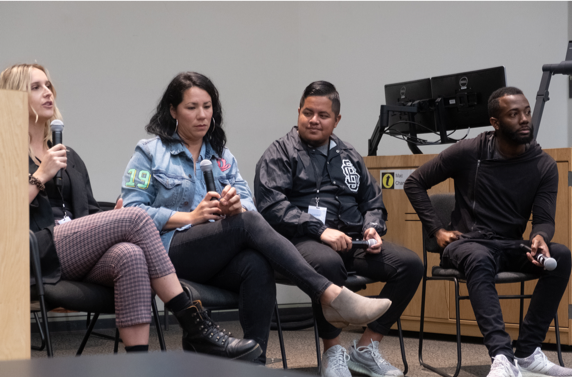 Austin based music festival promoters give insight into the music industry

As part of Mass Comm Week, Lexi Dolan, Gina Martinez, Edward Castillo and Kevin Hayden, provided a crowd of students with insight into the planning and production of events within the music industry.

Founded in a UT dorm room in 2009 by Sascha Guttfreund and Claire Bogle, Score More Shows is the event promoter behind the success of music festivals like JMBLYA, Mala Luna, Neon Desert and Dreamville.

Score More’s vice president of festival and operations, Gina Martinez, who is a Texas State alumni, was inspired by her husband’s musical career and her own interest in the music industry to create a one-day music festival in her hometown of El Paso.

“I went out one night with some friends, had a little too much tequila and was like ‘I have this great idea, we should start a music festival’, and we did,” said Martinez.

Martinez discussed the birth of what is now the Neon Desert Music Festival and the process of putting it together for the first time.

“Those first few years of Neon, we did everything. I picked up trash, I sold tickets, I helped with artists’ dressing rooms, and really learned the industry from the bottom up,” said Martinez.

Marketing director, Kevin Hayden, had been working for small shows and clubs in San Antonio  when he was reached out to by Score More’s co-founder, Clair Bogle.

“We were the first people to score Future, Kendrick, J.Cole, and you know, that wave of music, from like 2009 to 2012… that’s kinda when we caught it and seized the opportunity and just went hard,” said Hayden.

Edward Castillo, who runs brand partnerships and sponsorships for Score More, is one of the directors behind JMBLYA and talked about the process and hardships of launching the festival.

“We had all these rappers that wanted to come to Austin around the same time, so we started coordinating,” said Castillo. “We couldn’t buy jambalaya, like the world spelled out, so we shortened it and we named it that and its been interesting watching that kitchen table concept turn into one of the biggest hip-hop festivals in Texas.”

One thing that all these successful festivals seemed to have in common and something that Score More prides itself on, is the crucial role of having a street team.

“Street team is super key to the DNA of who we are because its about the community giving people ownership of the experience,” said Hayden.

According to Hayden, it is not only beneficial to support members of festival street teams by  buying tickets from them, but it is also a great way into the music industry on an introductory level.

Castillo added that being a part of a street team can also be crucial into getting a job within the industry because it shows who is willing to show up and put in the work, something that is hard to tell from simply looking at a resume or reading a well written email.

Martinez jumped in by pointing out that one of the things that sets Score More apart and the reason behind their success is a basic concept that Guttfreund and Bogle came up with when they started the company.

“They have that person-to-person connection with the people that attend the festivals by being out there shaking hands, giving out free stuff and that really differentiates them from any other promoter,” said Martinez.

In addition to closing the gap between promoters and festival goers, the executives emphasized the importance of giving their customers the best experience possible. To Castillo, the customer experience includes letting the people make the festivals their own.

“When people tweet and complain about something, we laugh about it but we also take it very seriously,” said Castillo.

Event and decor coordinator, Lexi Dolan, describe her personal creative and design process as a walk in her audience’s shoes.

“If I am walking into this festival, and I love the artist, I love their music, what am I wanting to experience?” said Dolan.

Martinez, who works closely with Dolan and other designers, mentioned that part of the experience they like to provide includes making sure that every festival is full of content and picture worthy material.

“People are paying more attention to smaller and smaller details so we really have to make sure that they are Instagramable because that’s what people are looking for,” said Castillo.

When asked for advice for students who are interested in working in the music industry and festival world, Hayden made it clear that experience does matter. He recalled his own process of applying to jobs in the industry and how he thought 5+ years of experience was ridiculous, but now, being 10 years into his career, wouldn’t hire anyone for an office job until they do their time as a street member.

“Something to lock your mind on is that, its going to take some time…In the first two years you’re gonna hate it, feel neglected, feel like people don’t like you or care about the work you do,” said Hayden.

Dolan added that it’s not that people don’t care about you but that the industry is very cut-throat and that there are pools of people going after these positions, especially at the beginning.

“It sucks to hear but you are very replaceable,” said Dolan. She then encouraged those interested in this business to stick with it and not dwell on the mistakes they make but instead learn from them and move on because they are inevitable.

To close, Castillo said that all his hard work, sleepless nights, and days where he couldn’t even remember if he had eaten that day, pay off when he sees people having the time of their life at their events.

“It is the most rewarding job I’ve ever had,” said Castillo. “But you really have to ask yourself, how bad do I want it, how hard am I willing to work and how much am I willing to put forward and you’ll get there.”