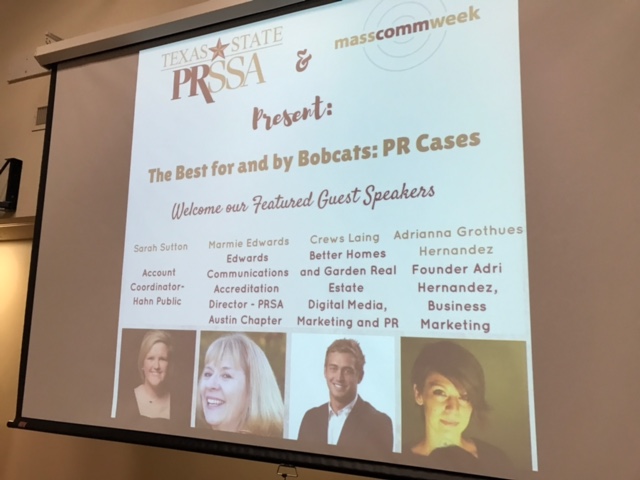 Public Relations Student Society of America hosted an event during Texas State University’s Mass Comm Week where four guest speakers handed out case studies to students, and explained each characteristic of those studies.

The interactive event was different than a traditional panel. Students sat at four tables in Old Main building room 320 and the guest speakers rotated about every 20 minutes. Three of the speakers were Texas State alumni and one is a current member of Austin’s Public Relations Society of America.

Table one started with Sarah Sutton, account coordinator at Hahn Public Communications. Sutton graduated in May 2015 and has been working at Hahn for almost one year. She got an internship with the company when she was a student at Texas State and returned after she graduated.

Sutton provided a case study from 2006 for Texas Gas Service to promote its Energy Efficiency Rebate Program. The program encourages customers to purchase energy-efficient natural gas for homes and businesses. Hahn was able to use a media strategy using traditional media, like broadcast and print, as well as social media to target certain audiences.

Since Hahn’s hand in promoting the company, Texas Gas Service has seen a continued growth and success rate over the last 10 years. A record $2.3 million in rebates were distributed in 2015.

The second table occupied Crews Laing, Marketing Specialist for Better Homes and Gardens Real Estate, Laing graduated in December 2015 and said he was not ready for the real world. He owned a political satire Facebook page that he started as a freshman at Texas State. The page was eventually sold before he graduated, but Laing wishes he kept it.

His case study covers how social media helps lead the real estate business. Laing uses social media to deliver ads to target audiences. He explained how websites, like Facebook, use third-party software that track a person’s web history. Then, it statistically targets who is most likely to buy a home.

“For a marketing specialist like me, it’s great. For people worried about their privacy, not so much,” said Laing.

He recommends using software like AdEspresso to become familiar with how websites use ads to target audiences. His biggest piece of advice to students is to “get involved, and do internships.”

Marmie Edwards, director at large for Edwards Communications, sat at the third table. Edwards handed out a case study she covered in 2008 while attending graduate school at Virginia Commonwealth University. The case study was about the first public tragedy triggered by texting on a smart phone.

A California Metrolink commuter train with 225 passengers ran a red signal at 42 mph and collided with a Union Pacific train traveling 40 mph. Both trains were sharing the same track and resulted in 25 people dying and 135 injured. Metrolink’s spokesperson held a press conference stating Metrolink’s engineer Robert Sanchez was responsible for the accident. The spokesperson’s emotions were peaked and she started to cry.

Edwards spoke about the struggle spokespeople experience keeping their emotions controlled. She mentioned a time she had to speak at a press release about an accident that involved the death of children.

“I knew if I said anything more I would tip over,” said Edwards. “Because I have children myself.”

She mentioned how important it is to pull the media back from situations and having a spokesperson on the scene of an accident is not a good idea.

“You can accept responsibility, without accepting liability,” said Edwards.

The fourth and last table had Adrianna Hernandez, founder of Adri Hernandez — Business Marketing for Busy Mompreneurs. Hernandez graduated from Texas State in 2010 and immediately landed a job as a marketing director. She got laid off one year later and founded her own marketing company in 2012. Based in San Marcos, she works from home full time to have more freedom and be closer to her daughter.

“To share stories, we use social media,” said Hernandez.

Her case study was about a local martial arts gym that “didn’t have much of a presence.” The owner wanted to have a bigger search result online and eventually expand locations and products. Hernandez was able to use social media and event planning to draw in more crowds over an eight-month period.

“Everything for social media was storytelling. To tell others’ stories and tell his [owner] story,” said Hernandez.

Hernandez explained the key is to keep social media constantly updated and changing. They held weekly events and ended up having a 40 percent conversion rate for members at one event. She says the highest converting events are women’s self-defense.

Any students who attend Mass Comm Week are encouraged to use #MCweek16 and share their experiences through social media. Conferences and events will be held until Oct. 27 in the School of Journalism and Mass Communication on campus.