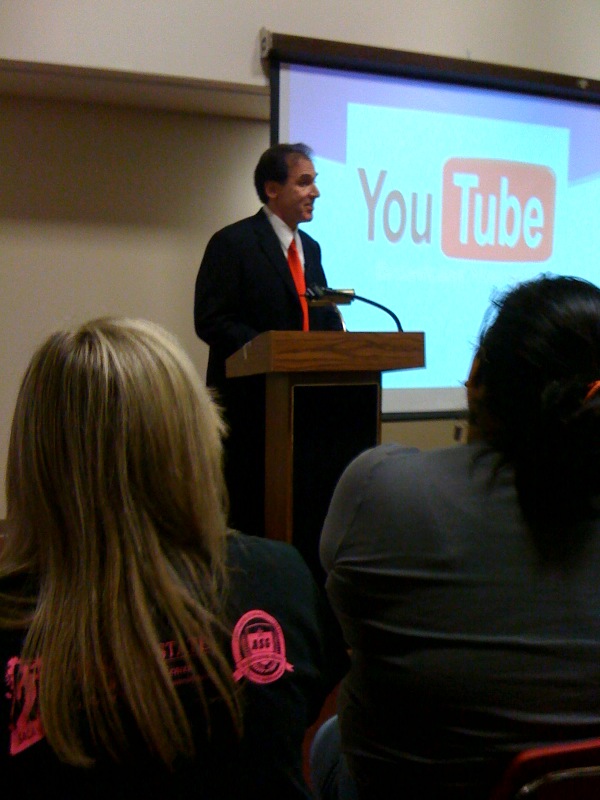 Brian Cuban spoke to Texas State students and faculty today about how hate speech has connected itself to the Internet and social networking sites.

Cuban, a Dallas attorney and brother of Dallas Mavericks owner Mark Cuban, got national media attention in May when he wrote the executives of Facebook requesting that Holocaust denial groups be removed from the social networking site.

“I’m not an activist,” said Cuban after the lecture. “The issue has personal relevance to me, and I’m just trying to do what I feel is right.”

Cuban pointed out that while the First Amendment protects hate speech in public forums, it does not apply to private entities such as Facebook, Myspace, Youtube or Twitter.

Cuban also offered multiple examples of how hate groups and sites serve as an “Internet hate incubator,” increasing the possibility of violent action. Cuban explained how online hate speech could have been a factor in James von Brunn’s murder of a security guard at the Holocaust Museum earlier this year.

“My opinion is that without the hate speech incubator, James von Brunn doesn’t commit what he does at the Holocaust Museum,” said Cuban. “You can build up hatred on Facebook and then walk out the real-world door and kill someone.”

Overall, the audience seemed both enlightened and stimulated by Cuban’s speech.

“I think the things he had to say were very valid points,” said Taylor Thompson, a recent Texas State graduate who attended the lecture. “I would definitely say that a lot of these hate groups should be taken down.”

Aside from bringing up valid arguments for the removal of hate groups on social networking sites, Cuban also educated the audience about the First Amendment application to hate speech and the Internet.

“I didn’t realize the difference between private and public [forums],” said Dara Quackenbush, senior lecturer and chair of Mass Comm Week. “Media law is not keeping up with the Internet, and this presentation highlights that.”

The students in attendance may have benefited most, as Cuban’s lecture provided insight into what type of online speech is protected by the First Amendment.

“I think [Cuban] opened the door for a lot of students in what they can and can’t do online,” said Chuck Kaufman, senior lecturer. “I think that it will make it easier for students to know that they can be held accountable for the things they publish online.”

Cuban said that the best way to limit hate groups or hate speech is to speak up. He noted the most social networking sites respond to issues when a large number of complaints arise, so reporting hateful groups and sites will usually cause action.

“The fight against hate speech can be incubated just as easily as hate speech itself,” said Cuban. “If one person goes online and reports a hate group and gets it taken down, it’s all worth it.”