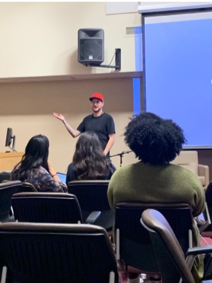 SAN MARCOS, Texas – Carter Severns helped kicked off Texas State University’s 2019 Mass Comm Week Monday with a seminar in Old Main about driving business growth with content. He discussed marketing strategies, the similarities between different kinds of marketing, and even some of his time as a student at Texas State.

Severns graduated from Texas State with a degree in advertising. He hadn’t always known he would fall into the world of digital marketing; he didn’t become interested until he began an internship for a company whose digital marketing arm was just getting started. His path eventually led him to open his own marketing company, Creative Cave.

“It just kind of, like, clicked,” Severns said. “I really enjoyed it, and it made sense. I really enjoyed the, ‘If I put this amount of dollars here and I see what it does, and see what people are clicking on,’ …that just made sense to me. And that grew into, ‘Okay, what other arms of marketing can we do?’”

Severns showed examples of people utilizing a strategy of “meet your audience where they are” in order to gain notoriety and fame. Lil Nas X, now famous for his song Old Town Road, didn’t pay for any marketing. He recorded the song using a beat he purchased from YouTube for $30, and promoted it using social media – Reddit, TikTok, Twitter, and more, until the song climbed the charts in the Billboard Hot 100.

Severns used this example, plus a few more, to drive home a couple of points. The first, and most central to his seminar, was meeting your audience where they are. For instance, utilizing YouTube or podcasting if you want to reach an audience that avidly uses those platforms. The same goes for Twitter, Instagram, or Reddit.

The second point Severns made was that there’s not too big of a difference between business-to-business marketing and business-to-consumer marketing. Regardless of which type, marketers still have to be able to make a connection between their brand and whoever they’re trying to reach with it. This, according to Severns’s teachings, is one of the major keys of marketing.

Aziza O’Bryant, a sophomore majoring in Digital Media Innovations at Texas State, took away some good advice that Severns gave regarding getting one’s feet wet after graduating college. O’Bryant said she has some anxieties surrounding getting from point A to point B, or going from college graduate to employee, so she asked Severns for his take.

“You have to do a lot of preliminary stuff, so that’s what I wanted to get out of this,” said O’Bryant. “There’s not a set recipe for how you get from point A to point B, but he said learning how to talk to people, basically having a good presence, being a versatile, conversational person can get you far in life. And when you interview for a job, you’re also interviewing for yourself. If it’s not lining up, you don’t need to be there. You’re interviewing them too; if they don’t fit for you, don’t work there.”

Ezequiel Gardea, a senior engineering student, also attended Severns’s assembly. Gardea says that every once in a while, he will attend events that don’t pertain to his major for some outside perspective. Marketing, he says, has never been of much interest to him. He did enjoy the information about the way Lil Nas X marketed himself, however, because Gardea is a musician himself.

“Seeing the way someone who, honestly seems more relatable than a lot of other big musicians out there, marketed his own music using stuff like memes and silly videos on TikTok was really interesting,” said Gardea. “I’m not the biggest fan of the song, but seeing that he pretty much got as big as he is with a $30 investment and some social media accounts inspired me a lot. I feel like I don’t have any excuses for at least not writing music.”

For the rest of the week at Texas State, there are more seminars similar to this for students to attend. These seminars are a great resource to network, get advice on careers, and get inspired about your school work. The schedule for Mass Comm week can be found at https://www.txstatemcweek.com/schedule/.