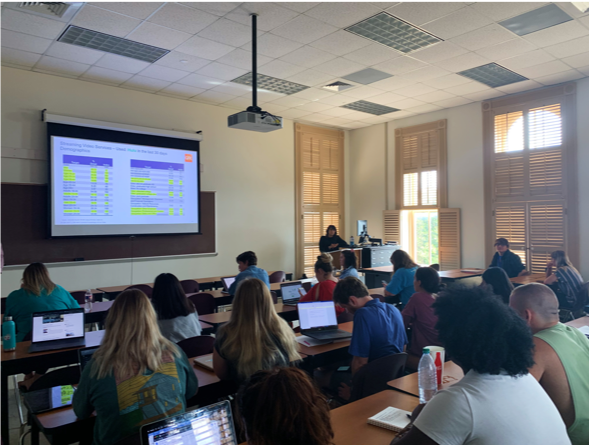 Croft worked for GfK MRI in Chicago for six-and-a-half years. GfK MRI collects market research data each year and it runs one of the biggest consumer surveys.

Croft first explained how GfK MRI’s goal is to help paint the sharpest possible picture of the perfect American consumer.

“They gather information about who they are, what they buy, what media they consume and how they think,” said Croft.

According to Croft, the company gathers data from its yearly Survey of the American Consumer. It’s a single source consumer database and it consists of about 25,000 people per year in the 48 contiguous states. The sampling clusters are re-drawn every year and the data is released semi-annually.

“Essentially, this sample is rotated each year,” said Croft. “So, they get new respondents every year so you’re getting new, fresh, data from a new set of people.”

She said the process of the Survey of the American Consumer begins by sending a letter of introduction and asking for a home visit. Next, the household will be interviewed and offered an incentive. If they agree to participate, they will be given a product booklet to fill out. Once the booklet is completed, it’s picked up and the data is collected.

“From the interview response rates, 59% participate in the personal interview and of that 59%, 64% complete the product booklet,” said Croft. “This is pretty significant because other research companies are in the high teens to low 20’s.”

The questions ask about the household’s usage of 500 product categories and over 8,000 different brands. She ended her panel by showing past data that has been collected and explaining how to correctly read one of GfK MRI’s reports.

Olivia Weber, a senior mass communications DMI major, was a member of the audience and explained what originally attracted her to attending the panel.

“I wanted a more in-depth knowledge of what companies actually take, information-wise, from consumers and I think Kirsten Croft explained everything in a way that was easy for anyone to understand,” she said.

Cody McElroy, a junior mass communications DMI major, also attended the panel and was shocked to hear the process of how GfK MRI collects its data.

“I think how they collect the data is super fascinating,” said McElroy. “I didn’t know the whole process beforehand and hearing exactly step-by-step what goes into collecting consumer data is something I learned from the panel today.”

Croft has worked in the advertising industry for more than 20 years. She says she was originally introduced to research and data from her job at KTBC-TV.

“A long time ago, the general sales manager at KTBC showed me a Nielsen book,” said Croft. “I just had a knack for understanding the research and knowing how to apply it.”