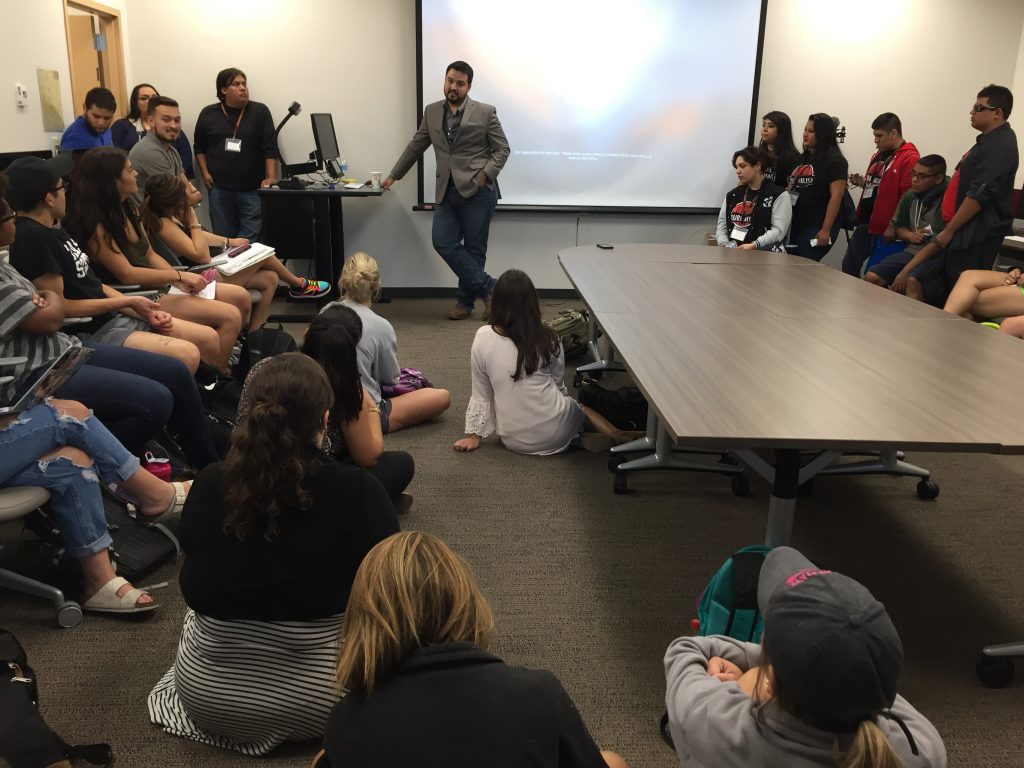 Supported by interaction from the audience, Gary Cooper, video journalist at Univision, shared stories and tips on how to make it in the journalism field to students of Texas State University and Laredo’s Vidal M. Trevino School of Communication and Fine Arts.

Before the session started, Cooper made himself relatable by talking to those who were already seated. Conversation floated between future plans and popular locations on the Square that have stayed the same since Cooper’s days as a Texas State student.

Cooper used a variety of storytelling, inspirational phrases and humor throughout his presentation to keep the audience intrigued and engaged.

“He didn’t come with a set plan of what he was going to say. It was like we were having a conversation,” said Gabriela Lopez, a Texas State freshman who attended the session.

During Cooper’s last year as a Texas State student, one of his friends got him a job at Sprint. After graduating, he realized that he didn’t want to live like an undergraduate student scraping to get by just to chase news and media for a career for five to 10 years. So he decided to work up the corporate ladder of Sprint and make decent money.

After a while, Cooper grew to hate his job selling phones. Although it was good money, he was miserable. This feeling led him to put in his two weeks notice, go out with some friends and never work at Sprint another day.

Cooper started sending emails and trying to find a paid internship dealing with his restored love of chasing news. It was during this time that he was reminded that what he wanted to do was not going to be easy.

After telling how he made it to his job with Univision, Cooper switched to talking about the importance of having an internship and how to get one. On top of reminding the audience about all the other people searching for the same jobs, Cooper added on his own piece of advice.

“Pester the hell out of whoever is in charge until you get in,” said Cooper.

But the main thing to remember, Cooper said, is to understand that no amount of schooling can teach someone as much as being in a newsroom can.

Another key point Cooper made in his presentation is that it is OK to make mistakes. It is how those mistakes are dealt with that is important. While the public is constantly seeing journalists make mistakes, it does get harder for reporters to be trusted but that should not stop anyone from sharing news.

“As the saying goes, an ugly truth is better than a pretty lie. If it costs you, then it does. But at least you can go to sleep at night,” said Cooper.

As a final statement to the presentation, Cooper shared more advise to the students.

“Work your tail off. Blood, sweat, tears. Get rejected. Get your heart broken. Wake up the next day and fight back,” said Cooper.

For many in the audience, like Angelica Espinoza, a senior at Texas State, hearing reassurance from a Bobcat alum that there is hope after graduation was what they loved about the session.

“He’s a former bobcat and he came back to Texas State to teach to other Bobcats what his career is doing compared to what he was doing in college. The same things that we do too,” said Espinoza.