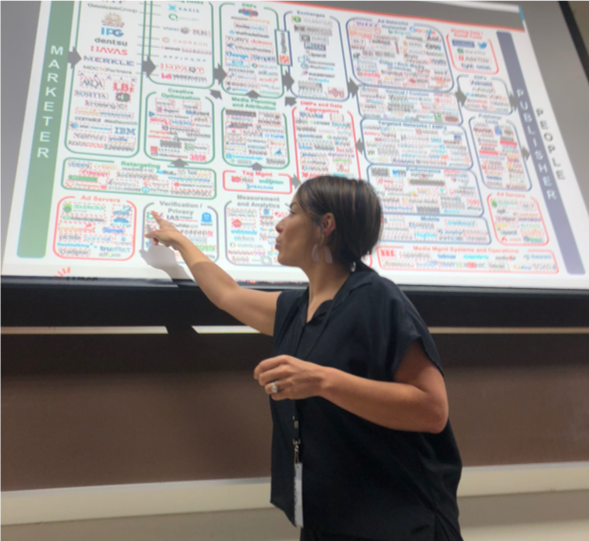 SAN MARCOS, Texas— Cimin Ahmadi-Cohen spoke to Texas State students Thursday during Mass Comm Week about digital media planning, including the way personal data is sold and how people are being targeted by ad companies.

Ahmadi-Cohen is a University of Texas media graduate who started a company called IdeaPeddler five years ago and has vast experience in the field of digital media. Ahmadi-Cohen spoke on the digital media landscape, the pros and cons of using digital as a media channel, hyper targeting and the role of tactics.

Although a large portion of people are still viewing cable, a shift to mobile has become known and more and more people are cutting the cord.

“If you’re only buying linear TV, you’ve got a huge miss in your audience and that’s when people talk about cord cutting,” said Ahmadi-Cohen.

As consumers move to digital and away from traditional media, Ahmadi-Cohen highlighted some pros and cons of the switch. The pros are that digital is quick to market, has real time feedback, is cost efficient, is hyper targeted and has no waste. The cons include massive fraud issues, ad blindness and an increase on privacy self-regulation.

“Fraud is a huge issue plaguing the industry and for a long time people thought that it could potentially bring the industry down, and it still could,” said Ahmadi-Cohen. “It is something to keep an eye on and rather than the industry as a whole it’s really looking like it’s affecting key players.”

The way consumers buy is fueled by data. Advertisers can use aggregated data to target ads to each individual. They can look at how users use mobile devices and use location to find out where people live and travel, and that determines what advertising pool they belong in.

“When your location services is on it’s capturing where you are,” said Ahmadi-Cohen. “The whole US has been graphed down to block by block, store by store, so wherever you’re going, that information is being aggregated, anonymized and sold.”

Digital media innovation major Kelly Engram said she is aware of the targeting.

“I feel like I should be more concerned than I am,” she said. “The thing is I am actually a little more informed than the general public about my data and what’s going on with it just because I’m in school and majoring in mass comm. With that said I don’t think that I am any more or less concerned than anybody else.”

However, some people are OK with the hyper targeting for now, including Texas State advertising media planning professor, Dr. Clay Craig.

“I do not have an issue with being hyper targeted because I work in the advertising industry so I like to see how those trends happen. I think that the general public is aware they are being targeted but not to the extent of how much of their data is being sold to other users,” said Craig.

Ahmadi-Cohen agrees and says people show lack of concern for being targeted because they do not know the extent to which they are being tracked.

“What the ad industry has been guilty of doing is keeping the extent of that fairly quiet because they don’t want to be regulated by government,” said Ahmadi-Cohen.

Ahmadi-Cohen finished by saying targeting is OK as long as there is a level of transparency.