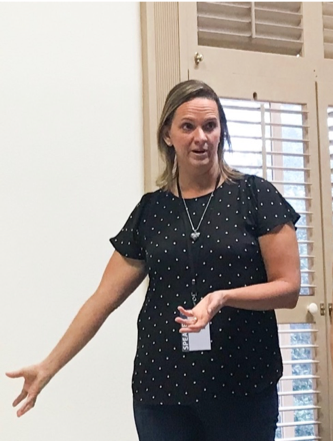 Stein has experienced many realms of advertising and didn’t find her niche and passion with software and research until she started working with Marketing Plus, a company based in Houston.

Stein started her journey with advertising and media when she was a student at the University of Texas and graduated with a marketing degree.  During her last few semesters at UT, Stein had an internship with GSD&M and was hired within her last semester.

The idea to start her own company happened when she wondered where clients would end up after they were trained about what to do with their projects and ads.  Stein would train these clients but wouldn’t get to see the aftermath of their presentation, and if they were successful.

Bridge Insights and Media started in 2013 and is now dealing with $6 million in media.

Molly Armstrong, a Texas State alumna, has made a name for herself within the company.  Armstrong graduated with an advertising degree in August 2018 and was hired in June 2018.  Armstrong said that the most surprising thing she has learned since working in the industry is truly how much you don’t know.

“You see things happen in real life and no two situations are exactly alike. I’m always shocked about how things go…some things I expect to go right, and they go left,” Armstrong said.

Stein compared large companies to smaller companies and said that one of the main differences in the two is that in smaller companies you are able to wear multiple hats and get more involved in team calls and meetings.  Hailey Brunnert, an advertising major, said that she would like to start small.

“I’m thinking more that I would like to work at a smaller agency and wear multiple hats like she was saying,” Brunnert said.

Monica Silva, an ad major, thought about some of her future goals after listening to Stein’s presentation.

When looking for potential employees, Stein said there are a few key points that are very important when hiring.

“It’s all about personality fit, motivation, and expression that they are eager and enthusiastic about the job they are applying for,” Stein said.