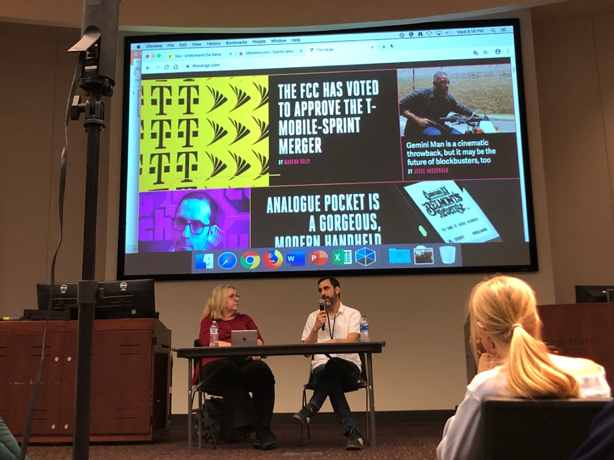 Pablo Mercado began as an English major at Texas State University before climbing up the ladder to CTO of the significant media company called Vox. He attended Texas States annual mass communication conference (Mass Comm Week) to explain his experience and give insight on how to build a career in media.

“There is the job that you are going to get, and there is the career that you want. They are not always going to be directly related, but at least you are put in the right environment,” said Mercado.

His career began as an account manager even though his dream was to be a programmer. Mercado said he would grab at any opportunity that arose and use it as a learning experience.

“It is good to have a broad area of interests instead of limiting yourself to specifics,” said Mercado. In his quest to become a programmer, Mercado gained experience in a variety of fields.

This broad experience helped him transform Vox from a sports blog into the technology and journalism pioneer it is today. Mercado and his team recognized a need for a new platform to make journalists’ jobs easier and readers more interactive and accessible.

“I like how progressive Vox is in the way they conduct their stories,” said digital media student Sam Dunn. “They cover a lot of news that is not covered in the traditional media outlets.”

Mercado’s goal with Vox was to marry technology and voice seamlessly to bring information to the masses in new and innovative ways. Journalists now need to be thinking of the story and how they are going to reach their audience simultaneously.

A public relations student, Paul Rodriguez, said, “Vox is a really cool company with a unique platform. I am not into journalism, and I still have a lot to take away from their story.”

Mercado ended his session with a meet and greet on the stage where students could get one on one questions.

For more information on Mass Comm Week and more great content from speakers, go to https://www.txstatemcweek.com/.