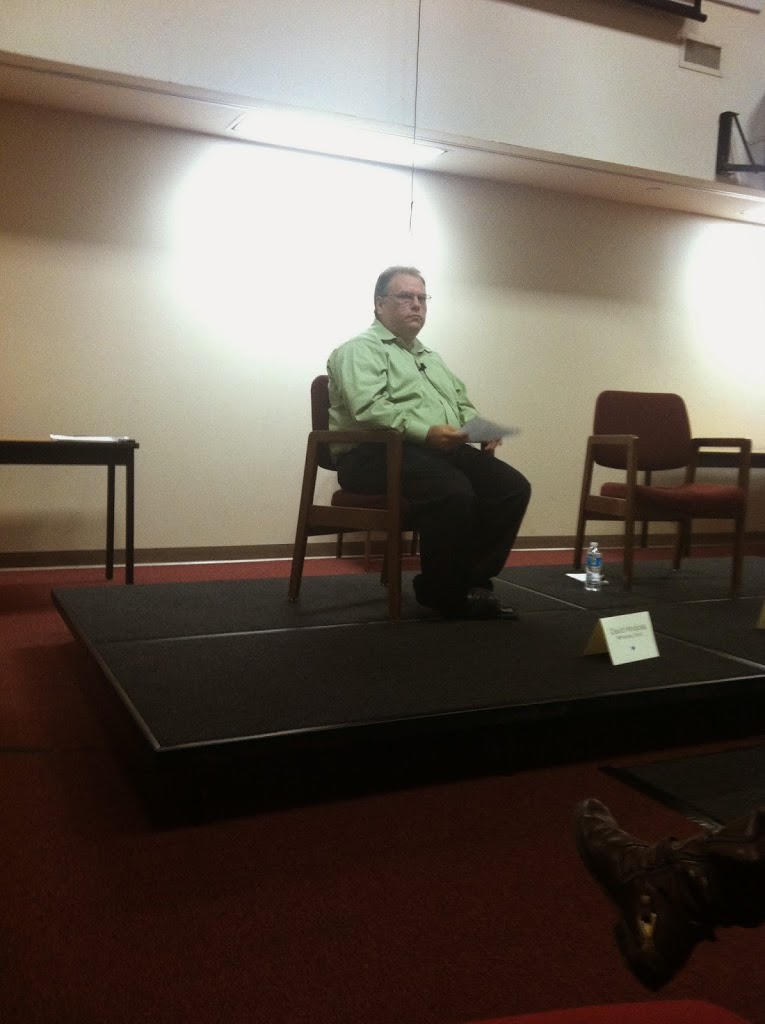 How to Break Into Sports Writing: An Interview with David Hinojosa

Veteran sports writer David Hinojosa participated in an interview and Q&A session titled How to Break into Sports Writing in Old Main 320 Wednesday as a part of Mass Communication Week at Texas State.

Gilbert Martinez, the assistant director of the School of Journalism and Mass Communication and a senior lecturer at Texas State, interviewed Hinjosa for the session. Both are alumni of the University of Texas-Pan American in Edinburg.

“It’s really an honor to get to talk to guys about a profession I love,” said Hinojosa. “It’s really the only thing I’ve ever wanted to do with my life. At times it’s been a good thing and sometimes I felt you get the bad things.”

Hinojosa writes for the San Antonio Express-News. He covers the high school sports beat for the paper, writing from a range of topics that include high school football, volleyball and track, among other sports. He also writes for community papers and for a bilingual publication in San Antonio, Conexion.

Hinojosa has over 20 years of sports writing experience, writing for publications such as the McAllen Monitor and the Dallas Morning News before joining the San Antonio Express-News in July 2013. He has won multiple awards throughout his career, including awards for feature writing, headline writing and sports writing.

With two decades work of experience in his distinguished career as a sports writer, he had plenty of advice for the students attending the session, which included students visiting from LBJ High School in Laredo.

“If you have any interest in being a journalist at all, being a writer or even being a broadcaster, I recommend you work at a school newspaper,” said Hinojosa. “Initially, don’t worry about the money, because as a volunteer or as an intern

Despite waking up at 4 a.m. and making a three-hour trip from Laredo, the visiting students from Laredo were excited to be at Texas State and had positive things to say about their visit.

“It’s a very good school,especially the Communications department,” said Ricardo Rangel, a senior at LBJ High. He said it’s the “best of both worlds”, commenting on the small-school feel of Texas State despite it rapidly-growing size.

“It’s really beautiful here, not only is it a good experience but you get to go outdoors and experience nature,” said Dayna Lopez, a senior at LBJ High.

Joshua McKinney, a junior at Texas State, is a major in journalism.