Warning: Undefined array key -1 in /home/txstatem/public_html/wp-includes/post-template.php on line 327
 How We Go Through This Matters - Mass Communication Week
Uncategorized 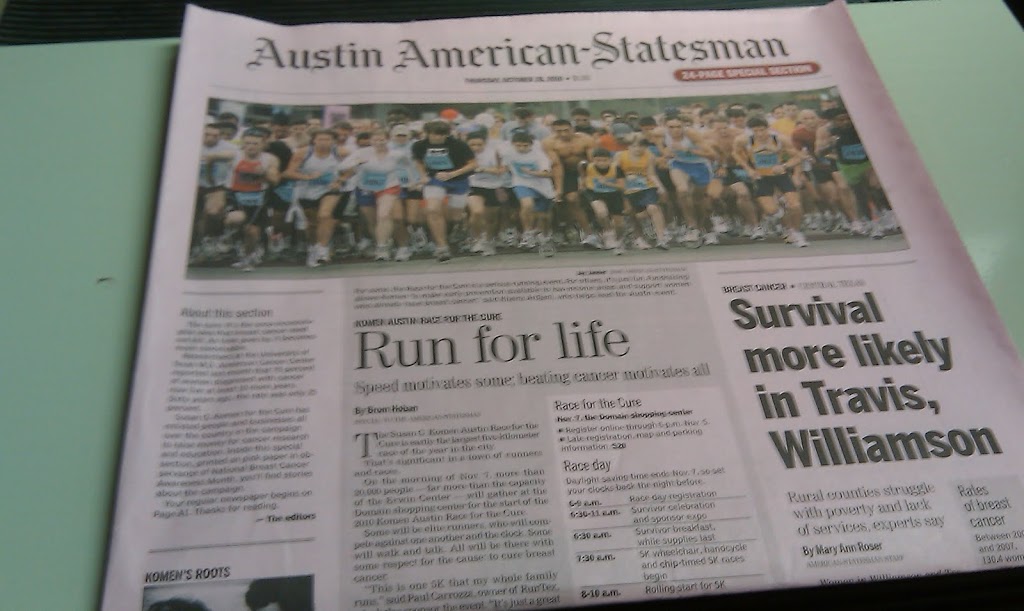 How We Go Through This Matters

A pink edition of the Austin American-Statesman, meant to promote breast cancer awareness, sat idly on a chair in the lecture hall as just one example of the ingenuity of publisher Michael Vivio and his team. The Statesman has not merely survived the recession, it has flourished. Vivio came to Texas State today to explain how.
In January of 2008, Vivio left his job at the Waco Tribune-Herald and moved to Austin to take his seat as the publisher of the Statesman. To his surprise, Cox Media Group, the owner of the publication, put the paper on the market that summer.
“Selling [the Statesman] was the part-time job I never wanted,” Vivio said.

Then the recession hit and the paper fell into a chasm of uncertainty. Could the paper maintain enough profitability to save the jobs of Statesman employees? And if so, whom would they be working for?
But thanks to the creative, revenue generating ideas of more than 400 staff members over the course of a year, Cox changed its mind.
“We survived the worst of the recession without mass layoffs,” Vivio said.
How could this be when papers all over the country were shutting down their presses?
Vivio had an idea. He asked all staff members to brainstorm solutions aimed at boosting the paper’s revenue. He received 2500 suggestions. Vivio condensed them into categories under six overall priorities he felt were essential to the paper’s survival.
One of the focus areas was the newspaper’s audience. Demographically, the readers of the Statesman are 40 years old or older. Instead of constantly trying to attain a younger readership, Vivio decided to cater to the audience he already had.
“We set about changing our business practices to acknowledge [the audience],” Vivio said.

That meant ad space dedicated to real estate and the kinds of things an older audience might buy, and content focused on investigative journalism and accountability. Enter PolitiFact Texas and its Truth-O-Meter, which has become extremely popular.
“We changed content to truth, justice and the American way. There is a reason Superman was a journalist,” Vivio said.
The Statesman grew its online penetration and has become the most accessible publication of any other newspaper on the internet. They have 11 websites including hookem.com, a site dedicated to Longhorn sports, and Austin360.
Publications have used their presses to print more than one paper for a long time now. Most newspaper delivery trucks distribute publications at night and go back to headquarters where they stay stationary for the better part of the day. The Statesman prints 24 other publications and its trucks transport flooring tile after making the nightly rounds. It’s all a part of what Vivio calls leveraging assets.
“There are so many assets at newspapers, you just have to think of them differently,” he said.
Another area the paper targeted was to create niche publications. The Statesman has created 10 weekly papers plus a car magazine and Vivio plans to unveil an internet radio station this December.
“Our goal is to become the ESPN of entertainment in Austin,” Vivio said.
But the most important priority to Vivio is the value of the people working for the Statesman. The night he broke the news to the staff that the paper was no longer for sale, the editorial department hired a mariachi band that showed up on his lawn to celebrate.
“It was one of the most gratifying moments of my career,” Vivio said.
jonzmikly
0