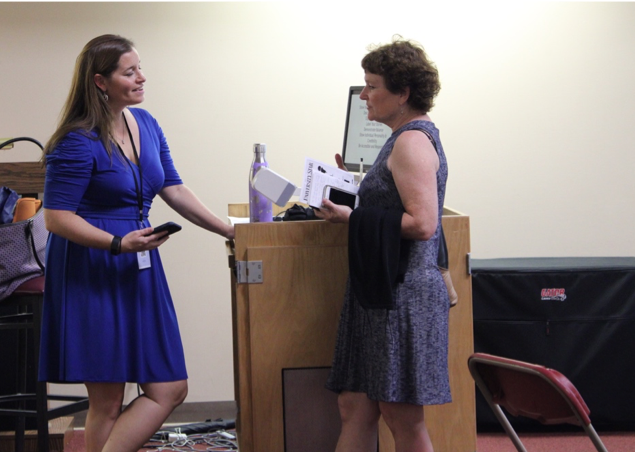 Journalism Keynote: The Truth About News with Lynn Walsh

In addition to her freelance investigative work, Walsh is the assistant director of Trusting News, an organization with aims to help newsrooms establish creditability with their audiences. She is also the ethics chair of the Society of Professional Journalists, a nation-wide organization of journalists that hope to encourage the free practice of journalism and high ethical standards

Walsh said that this doubt of the media has developed as technology has advanced, specifically as information accessibility has improved, social media has become more widespread and new news mediums have become more prominent. She also cites government deregulation, particularly the abolishment of the Federal Communications Commission’s 1949 Fairness Doctrine, and how current media marketing practices have made advertisements the main factor driving income for some publications.

Media literacy was a major touchpoint for the keynote with Walsh laying out eleven ways to be a responsible news consumer.

She closed by saying that aspiring journalists seeking entry into the field are in luck with the many methods for creators to get their reporting in front of consumers.

“I think that it easier now to break into the field because of the internet. Now you can reach so many people. Before, if you were a local reporter for newspaper or television, you really were only reaching the area where you were,” Walsh said. “It is now easier to create your brand, be consistent and get people to follow you.”

She also gave some insight into what newsrooms are looking for right now, citing that data reporting, data literacy and engagement skills are what they need in their fellows, interns and reporters.

“Any kind of data skills are something that a lot of newsrooms need, want and don’t necessarily have,” Walsh said. “(Engagement journalism) is moderating conversations, responding to criticism … any of that moderating when it comes to groups, social media or feedback is so important and there are not enough people in newsrooms that know how to do that.”

Brandon Rios, a senior public relations major, said the keynote was eye-opening to him because he never before understood the impact that journalism could have.

“I didn’t release how much of a pull (journalism) had on society,” Rios said. “It’s especially interesting when thinking of the way that all of the small and big news sources with a variety of takes are on things. It is possible that each person in this room gets their news in a completely different way.”

“I used to work at parking services and one of my bosses showed me something online and I said, ‘this is a fake video.’ I Googled it and I found a video showing just how fake it was,” Rodriguez said. “Media literacy is important. Just because it is online does not mean that it is real.”