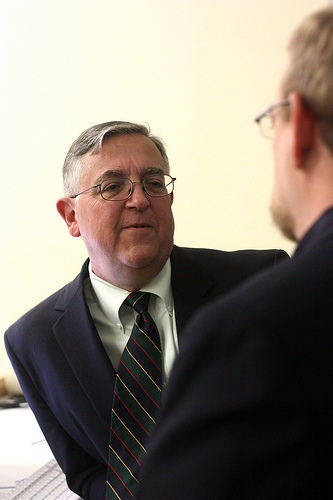 KLRU CEO Bill Stotesbery speaks about the Future of Television

Bill Stotesbery, CEO of KLRU, speaks with Tim England, associate professor and sequence head of electronic media, before his presentation entitled, “The Future of Television” during Mass Comm Week at Texas State University.

By: Daniel Palomo
Bill Stotesbery, CEO of KLRU, delivered a presentation entitled, “The Future of Television” at Texas State University’s Mass Comm Week.
Mr. Stotesbery wanted to make one thing clear; the future of television is not in jeopardy.
“There’s always been this question of ‘what’s the future of television’, through each of the innovations television has remained television,” Mr. Stotesbery said. “The future of television is television.”
His presentation focused on five different aspects of the future of television; platform, content, distribution, viewer experience and business model.
The platform is important because television will be interacted with in different ways. The new platform is comprised of one television set that allows a user to consume media from a plethora of sources simultaneously. The new platform must continue to maintain television’s ease of use, but allow for a much more interactive and exploratory experience.
“The key to the user experience is for the platform to become sufficiently integrated with an infrastructure of software or firmware that makes it as transparent and seamless for the user as it can possibly be,” Stotesbery said.
The platform of the television must change, in part, because of the of the demand for user-created content.
“Youtube was a brilliant creation and for years people have talked about Youtube not having an effective business model,” Stotesbery said.
Recently however, many stations have successfully integrated Youtube and other user-created content. It has also provided an avenue for this broadcast content to be widely viewed. Mr. Stotesbery used an example of an interview Evan Smith held on the KLRU program “Texas Monthly Talks” (now “Overheard w/Evan Smith).
“As an experiment”, KLRU decided to place a clip of an interview with “former guitar god” Ted Nugent on Youtube. The video went viral and was viewed more than 2.5 million times.
“We could produce programs from now until Hades freezes over and we couldn’t put something up on the air that would be seen by 2.5 million people,” Stotesbery said. “Within our market, that would be an unattainable goal.”
Content, via the web, is now being consumed in many different forms. This has led to the multi-platform and transplatform perspectives of content.
“There’s nothing that we do today that we don’t think about how it translates into, at least, a multi-platform environment.” Stotesbery said. “We’re no longer just programming for television.”
Without the restraints of traditional broadcast, producers can begin to “experiment with format”. These new experiments with content production, combined with the rise of user-generated content compels a station to do more than produce and deliver content.
“We become repositories of content and make determinations about the best way to obtain and the best way to deliver.” Stotesbery Said.
In this content-saturated environment, locating quality content becomes a significant challenge. Social media can be an effective tool in closing the gap between content and consumers.
“People are led to content increasingly by the advice and guidance of others with whom they share some common affinity,” Stotesbery said.
Apart from social media however, distribution of video has been disintermediated, meaning there aren’t clear channels of distribution. In broadcast, content distribution is strictly-mediated by its producers. In this new “disintermediated world” channels of distribution, such as Myspace, come in-and-out of popularity and thus success.
“It’s still the wild west,” Stotesbery said. “The ability for us to be able to know where to go, to find what it is that will be the best of what we want, is going to increasingly become part of the key challenges the future television is going to face.”
The viewer experience is becoming a convergence between the two worlds of content; web and television. With the advent of “smart” television sets and mobile-viewing devices the “digital living room” is taking shape. It is essentially a mobile living room allowing for the consumption of content and the interaction of viewers wherever they consume media.
This convergence represents a future of interactive television where “social network process increasingly becomes a part”, according to Stotesbery.
These changes have forced the television industry to pursue different sources of revenue, according to Stotesbery. Consumers may have to start paying for content or accepting more structured advertisement intrusions, as is the case in broadcast.
“Ultimately, the business model has to be a heinz 57,” Stotesbery said. “It has to merge bits and pieces, so that you have multiple revenue streams until one of them gets the kind of traction that may become a defining business model.”
With broadcast’s business model in flux, producers navigate uncharted territory.
“We’ve got radical technology advances, new business models, reduced barriers to entry for competitors and content, economic uncertainty, changing demographics and an ongoing demanding business and regulatory environment.”
Despite the industry’s transformation, Stotesbery asserted consumers demand for television is still strong and will remain so. Television will remain a dominant leisure activity, Stotesbery said.
“We still want to have some place to go to, to obtain some relief of what we deal with in reality,” Stotesbery said. “So we want to go watch something that somebody created.”
jonzmikly
0