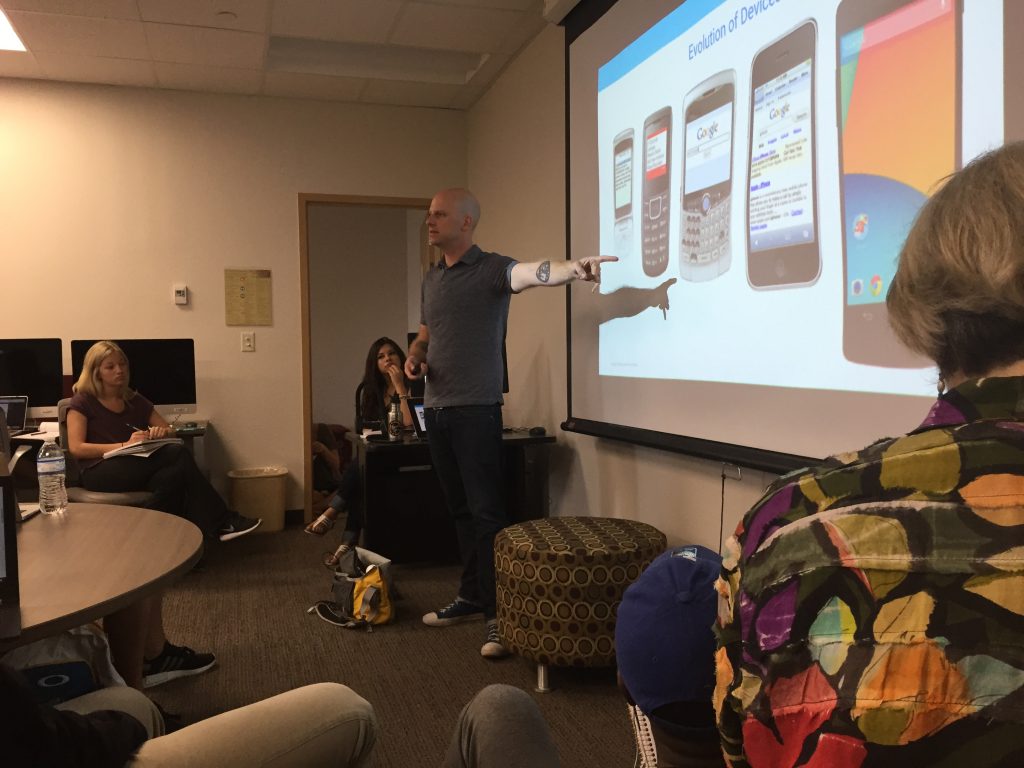 Learning the tools of Google

After only being off the plane in Austin for less than a hour, Nick Whitaker, training and development manager at Google spoke to students in Old Main about his job, as well as different tools Google supplies and insight on how to use them.

Whitaker and his team at Google News Lab work toward helping journalists figure out what the future might look like. His team is one of three in the News Lab: training and development, trends and programs.

“At a very high level, our team focuses on journalists, journalism, newsrooms and what the future of media might look like,” said Whitaker during his presentation.

His team has helped train more than 40,000 people in person worldwide since 2012 on how to use the tools Google offers.

During his hour and a half speech, Whitaker covered a variety of tools people have available to use through Google and how to use them. The main ones he focused on were Google Search, Images, Scholar, Public Data Explorer and Trends.

On top of sharing how to use each tool, Whitaker helped make each program useful in storytelling, something that journalism is becoming more like, according to Whitaker.

While someone who was not paying close attention may have thought Whitaker spent his time talking about topics such as brunch, sacred geometry and surfing the web in 1998, he was really making learning and understanding the different tools easier.

Whitaker showed the audience things such as how to narrow searches through typing it a certain way in the search bar as well as in Google Advanced Search, how to search for a photo, the validity of a photo, how to use Public Data Explorer to focus on broad and narrow subjects and how to use Google Trends to a fuller capacity.

Many students, like Tabitha Guardiola, an electronic media major, agreed that their favorite part was the information given about Google Trends.

“It was interesting to see the dynamics of what people Google search and why they do it and how there’s a bunch of people searching the same thing and you think you’re the only person,” said Guardiola.

Whitaker ended the session by briefly teaching about 360 technology and involving the audience to partake in a 360-degree photo. Besides showing the camera made for a one-click photo, he also mentioned how the 360 Street App can do the same thing- just with a lot more clicks.

Whitaker will give two more sessions this week on Wednesday at 2 p.m. and 3:30 p.m. For more information about the tools taught in this session, visit Google News Lab.