Media Relations: From Catching News to Pitching a Story with Mike Cox 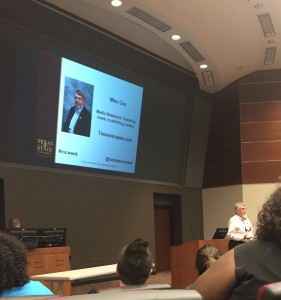 Mike Cox, journalist and author of 29 books including his acclaimed two-volume history, “Cowboy Stuntman: From Olympic Gold to the Silver Screen,” came to Texas State University for its Mass Communication Week to talk to students about his experience in the journalism and media relations field.

Cox became a journalist at the age of 17 and for 20 years was dedicated reporting on law enforcement issues on local and state levels. He was one of the first Austin American-Statesman reporters on the scene of the Charles Whitman UT Tower shootings in 1961.

Recently, he came out of retirement to become a spokesperson for the Texas Parks and Wildlife Department.

Cox shared with the students what it was like working as a journalist at a very young age. He says he describes himself as a time traveler.

“I had dimes in my pocket for payphones when I started my career and now I’m experiencing using twitter. You could say I’m a time traveler,” Cox said.

In the session, he spoke about what it was like to work as a law enforcement reporter, all the danger and deaths he had to face and the obstacles of being in media relations.

“There will be sleepless nights and maybe some psychological issues. You need to be well on your feet and be able to answer questions quick with well thought responses,” said Cox.

His key points in the presentation were; stay away from speculation, never say anything you don’t want printed, avoid cop talk, and always expect the unexpected.

Cox brought many detailed instances of events he experienced throughout this career to the presentation that many students found very helpful.

Like, Kate Silva mass communication major, who attended the presentation, appreciated that he told real life stories and experiences she could relate to.

“He wasn’t only speaking about media relations but also real life experiences so it made me look at it a different way, giving us a better view of what working in the field will be like. Even though I’m not in media relations, I’m going to probably someday experience something similar to what he’s been through,” Silva said.

Another student who attended the presentation journalism major, Caitlin Peeler, appreciated the journalism aspect of his session.

“What I got out of this session is that no matter if its journalism or media relations, you have to write, know editing tools and know how to write in AP style,” Peeler said.

Later on, Cox spoke about a few intense stories he wrote throughout his career that were “offspring” for many of his books.

Some of them still bring him to tears to this day.

“I had to deal with a lot of blood, no sleeping, psychological issues and criticism,” Cox said.

But all in all Cox is proud of his career and everything he has been through.