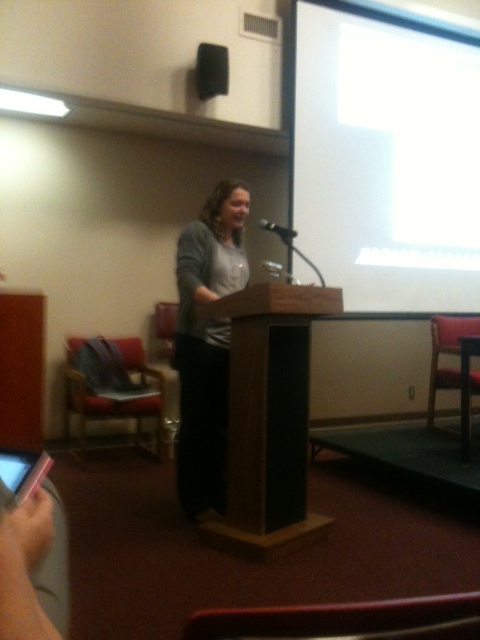 Lara Pellegrinelli, who began working with NPR around three years ago, says she feels that music journalists should focus more on big pictures issues rather than CD releases and artist performances.

During her speech Pellegrinelli outlined some of the most common genres in the news coverage of music. The two biggest, she said, were the announcement of new recordings and upcoming performances. However, she says she feels journalists should make a point to explore deeper meanings, using artists as the platform.

“Recordings are frankly far less important. We need to start looking at new models and we need to start in a hurry,” she said. “Digging into deeper cultural issues [is] hard to do, but we need to do it. “

Pellegrinelli played for the audience a radio piece she had worked on about artist Rene Marie. In 2008 Marie, an African-American jazz singer, was commissioned to sing the national anthem before the State of the City address in Denver. Marie sang the melody of “The Star-Spangled Banner,” but substituted the lyrics with “Lift Every Voice and Sing,” a song considered by many to be the African-American national anthem. The performance caused quite a stir and many said they considered it to be a disgrace.

When Pellegrinelli’s piece finished, the audience in Old Main applauded.

When she asked the audience what the core meaning of her piece might be, replies included civil rights, freedom of speech and the definition of patriotism.

“Use the artist to talk about something much larger. It’s not easy to do, but I’m trying to do it,” said Pellegrinelli.