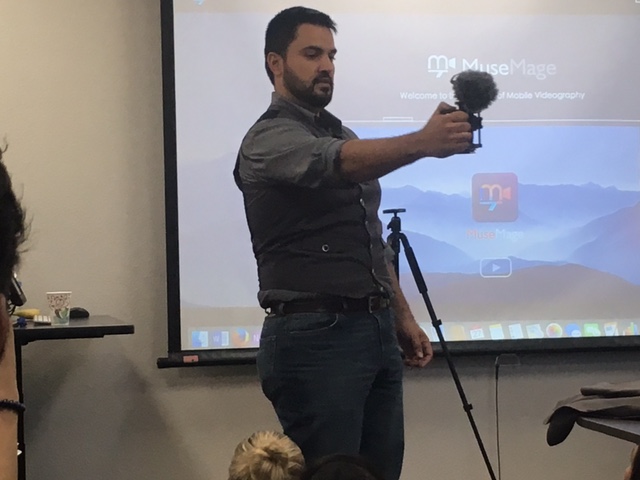 Looking forward to the event Alison Bryce, a mass communication student who attended the lecture said, “Honestly I just want tips on how to survive in the actual field of journalism and any advice he (Cooper) may have.”

More and more people are doubting the media, but “the ugly truth is better than a pretty lie” said Cooper during the lecture.

“I hope that I can find a direction in my journey of finding an internship,” Jordan Sisler, a Texas State student said. “I’m really worried about getting out of college and not knowing where to go and not finding a job.”

Cooper gave helpful insight, but one of the tips he stressed was that nothing comes easy and that students should continue working.

“Anything is attainable if you work your butt off,” Cooper said.

Getting fired was his best constructive criticism because he learned that there is always someone waiting for you to fail and take your place.

Cooper grew up in Del Rio where the population mostly consisted of Hispanics and he thought attending a university as large as Texas State was unreachable.

Originally, Cooper changed paths after graduating and decided to focus on making a big salary but remembered his dream.

As a child, Cooper remembered his past of working for the local paper in his hometown and decided to pursue a career path in the newsroom and as a reporter. Cooper paved the way for his future by pestering employers and he started interning with the production team member for San Antonio’s KENS.

“Every day is an adventure,” Cooper said during his lecture.

During his internship, he shadowed reporters, producers and photographers and he recommended students do the same.

Cooper also discussed the change in how people are consuming media and the importance of the willingness to learn.

“Something I recently started looking into is 360 video and things like that,” said Texas State student Angelica Espinosa. “I currently use an app called Fuse where you can take pictures and it has 3D and even though I am advertising I still can use those apps for advertising.”

The lecture also included videos on examples from professionals, although he also showed the importance of being an ethical journalist with some bad examples.

Since broadcast is becoming more instant, Cooper gave students sites and professional tools to help them start learning like Videolicious, Moviepro and Musemage.

“It’s OK to be confident, but what sets you apart,” Cooper asked during the lecture.