Spurs On the Airwaves

Spurs On the Airwaves

“I look at it in two ways, both as being a broadcaster and as a viewer,” Monaco said when asked about social media and its impact on sports broadcasting.

“I like the idea of social media. I like the idea of viewers being able to tune into the game with not one, but two screens. So we really have tried to incorporate that two-screen watching style into our broadcast with Twitter feeds and Facebook trivia questions.”

“People just don’t watch the games like they used to. Now people watch the game on their TVs along with their IPhones, IPads and laptops,” Monaco said.

Bill Land, who has announced every regional telecast for the Spurs over the past 14 years, answered a few questions about ratings and how he handles his job of being on TV every night during basketball season.

“As far as the telecast, I don’t really worry about the ratings cause there is nothing that I can do other than just try to do my job to the best of my ability.” Land said.

“I also work with a great crew. We have a terrific group that we work with. We have meetings every game day where we talk about things and nobody is ever offended when someone says, I think we should have gone a different direction with this the other night, or we should have focused on this a little differently. So we’re always open to criticism from the group because things can always be done better.”

Mike Kickirillo was asked to describe what it is like to direct an entire live sports broadcast and his answer was witty and honest.

“Adjustment; I think that goes for everything that we do in this field. We talked earlier about the changing of media; that’s an adjustment. Live TV is nothing but one big adjustment. It never goes as scripted; if you want to work by a script then you’re screwed because if you don’t have the flexibility to change on the fly then it is going to be a struggle.”

From all appearances during their session, these three men inspired the students from whom they were taking questions from. They offered in-depth answers and insights. Similar to their live broadcasts Mike, Andrew and Bill all brought a special piece to contribute to the team, while working together to deliver an important message to many people over a microphone. 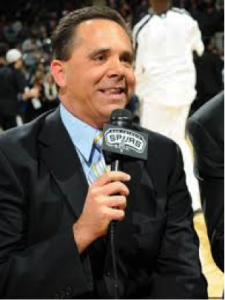 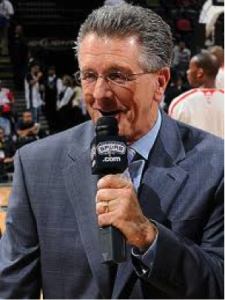