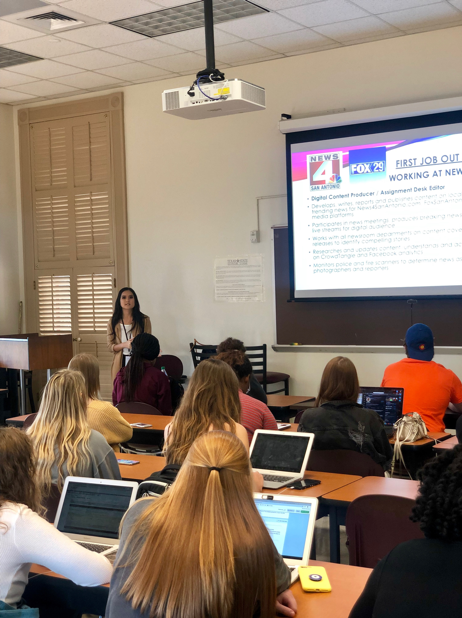 South Dakota native Phillips discovered her passion for writing in high school. Recognizing she could take her love of writing and turn it into a career she made the move to Texas to attend Texas State University. Her freshman year Phillips joined a Living Learning Community.

“It was one of the best decisions I ever made here. I met some of my best friends there. We were able to explore everything that mass comm was,” said Phillips.

Spontaneously, Phillips joined the University Star, where she gained the position as a sports reporter and eventually became the sports editor.

Phillips began applying for internships before she graduated from Texas State.

“Internships were a big part of my college career. I knew they always told you to get your foot in the door, so I decided to apply for news station internships,” said Phillips.

Phillips tells how her internship experience allowed her to see first-hand what her professional career could look like. She describes how these internships pushed her to see what she was capable of.

“I was able to practice being a sports reporter. I got to go to all kinds of football games, basketball games, basically all different types of games with their reporters and anchors. I got to see how they work, and practice being on camera,” said Phillips. “It was really good to just be able to practice. You can mess up as many times as you want because it’s all practice.”

Phillips says that the best thing students can do as they begin transitioning from student into professional is to not set limits on yourself as you start applying for jobs and to apply for as many jobs as possible.

“Keep an open mind as you’re applying to jobs. This could lead you to finding your dream job,” said Phillips.

She says your first job will not usually be your last or your dream, but every job offers some type of experience you can carry with you throughout your career.

Hannah Stockton, a senior public relations major at Texas State, says the session was encouraging to her because she sees that you do not have to narrow yourself as you begin searching for jobs.

“The best piece of advice I took away was to open your horizons when looking for jobs. I know during my internship that I was super focused on finding what I wanted and not looking outside the PR field,” Stockton said.

Throughout the session Phillips encouraged every student to always put yourself out there and not to be afraid to reach out to the people you want to work for.

Junior mass communications major Priscilla Meza says that she is now more determined to put herself out there in her field.

“My biggest fear is getting out there, I am really shy, I think that is the main idea is to put yourself out there,” said Meza.

Phillips, who is now an associate producer at Spectrum News, ended the session with a Q&A for all students attending.