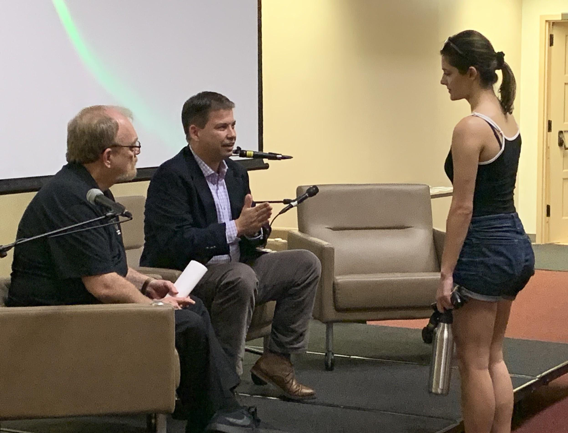 Cartwright’s career has taken him to San Antonio, Dallas, Washington D.C., Syracuse, New York and Austin, Texas, where he is currently the news director at KEYE-TV.

Cartwright began by discussing how news is more digitally focused now and how stations have to go where the users are to stay competitive.

“We break everything online now,” Cartwright said. “More people will see our product on a digital screen than on TV on any given day, and I think that’s true for any news organization out there.”

He continued about social media’s importance for the immediacy of breaking news and how his station maintains a presence on Facebook, Twitter and other platforms because they don’t know where people are watching. Unlike newspapers, he added, TV is immediate and still the number one place that people go for local weather coverage.

For new jobs in TV after graduating, Cartwright encouraged looking at becoming a producer because “it’s a direct path into TV news.”

Reporters are in charge of their minute-long segment, but as a producer, they are in charge of the whole show itself. Cartwright explained that because most people want to be on air, producers are hard to find and there is a shortage of them in the field.

“It’s not a glamorous job,” Cartwright said. “People think that producers get all of the blame and none of the credit. You’re not in the limelight, you’re not on camera, but you are in charge.”

Cartwright discussed how advances in technology have changed news coverage. Instead of loading up a news van and all the equipment, now anyone can just load up Facebook and go live to cover anything.

“We’re always going to be striving and looking for the audience and it just depends on where the audience is,” Cartwright said. “The biggest audience right now on TV news is 55 to dead.”

With millennials moving to streaming networks, for TV news to survive, Cartwright said news stations need to do more digital and live content. He also said TV news should remain local and find their niche.

“Once you lose the local part of what we do, you could watch it on Netflix or any app out there,” Cartwright said.

“I think every journalist should be truth driven,” Cartwright said. “Wherever you stand on the political spectrum, these past few years have been incredibly challenging to be a journalist. It’s just an assault on our business. But you don’t have to worry about that if you’re telling the truth. If you’re sticking to the facts. As long as you stick to the truth and only report the truth, you have nothing to worry about because at the end of the day, the truth is going to win out.”

Cartwright discussed the disservice that some of the bigger networks have with the presence of biases and the lack of distinction between news and opinion.

“When you have to fill 24 hours, like Fox News and CNN have to do, you get viewers because of your base,” Cartwright said. “But they’re not really doing the news, they’re doing opinion. Local news is not really that. It’s news, and yeah, we do commentaries but it’s separated from the news and we do both sides.”

He went on about how important diversity is in order to reflect the community.

“Diversity is often overlooked, but we are very diverse for a central Texas newsroom,” said Cartwright. “Having all white anchors is a disservice because you are not reflecting the community that your serving.”

“It’s a lot more challenging than I thought in terms of reaching out to audience demographics and digital communities,” said Tiger Shen, an aspiring broadcast journalist.

To finish, he talked about the importance of internships and that one of the most important skills in getting a job is work ethic.