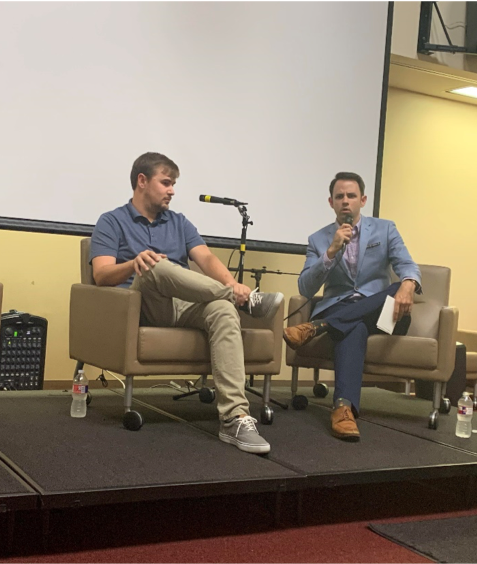 College sports have been broadcasted on TV since the 1930’s, but not all colleges or sports were given this opportunity. The Southeastern Conference and the Atlantic Coast Conference are the only two conferences who have had their sports games broadcasted on ESPN. Other conferences used their own websites and broadcasting formats. In 2018, ESPN+ was created as a streaming service for teams that were not big enough to be broadcasted on live television.

The Sun Belt Conference, of which Texas State is a part of, was given the opportunity, by ESPN, to stream their sporting events live on the app. This allowed Texas State to create a production team made up of a few employees and many students. The university now has a state-of-the-art control room that mirrors one used for ESPN.

“The school had a production room built and was given everything from replay monitors to equipment to audio, cameras, lenses that can cost up to $30,000 apiece,” Freeman said. “We have that in place now. Every school in the Sun Belt has this now to produce their own games.”

Freeman, a Texas State grad, was an employee for the local radio station, KTSW, while he was a student. After he graduated, the station offered him a full-time position as the “voice of the Bobcats.” When the chance arose for Texas State to broadcast their sporting events on television, rather than radio, he became the face of the Bobcats as well. Freeman currently works as the play-by-play announcer for Bobcat Sports.

The process of a television broadcast along with the communication throughout the production team is vital to the outcome of the broadcast. Texas State has given students the chance to learn the ropes of a control room and how to broadcast a sports game live.

“If you have either a love for sports or a love for production, we want you on our team,” broadcast productions manager, Lucas Haskins said. “If you are in a control room and liked it, you know you are in the right place.”

Haskins is looking for students to work for him during all sports seasons and is eager to have people on his team who want to be there.

Senior Makenzie Harrison is an electronic media major and applied for a broadcasting job last year. She sent in her resume and had an interview with Haskins 30 minutes later. She is responsible for shooting b-roll and editing clips together to make a story for every sport.

“I went to Texas Tech at first and was working for the newspaper there doing video,” Harrison said. “I ended up transferring here and was looking for something similar. I love the adrenaline rush and the energy of the broadcasting experience.”

The Texas State broadcasting team is always hiring due to students graduating and moving on, so for more information visit www.txstatebobcats.com or apply on Handshake through Texas State Career Services.