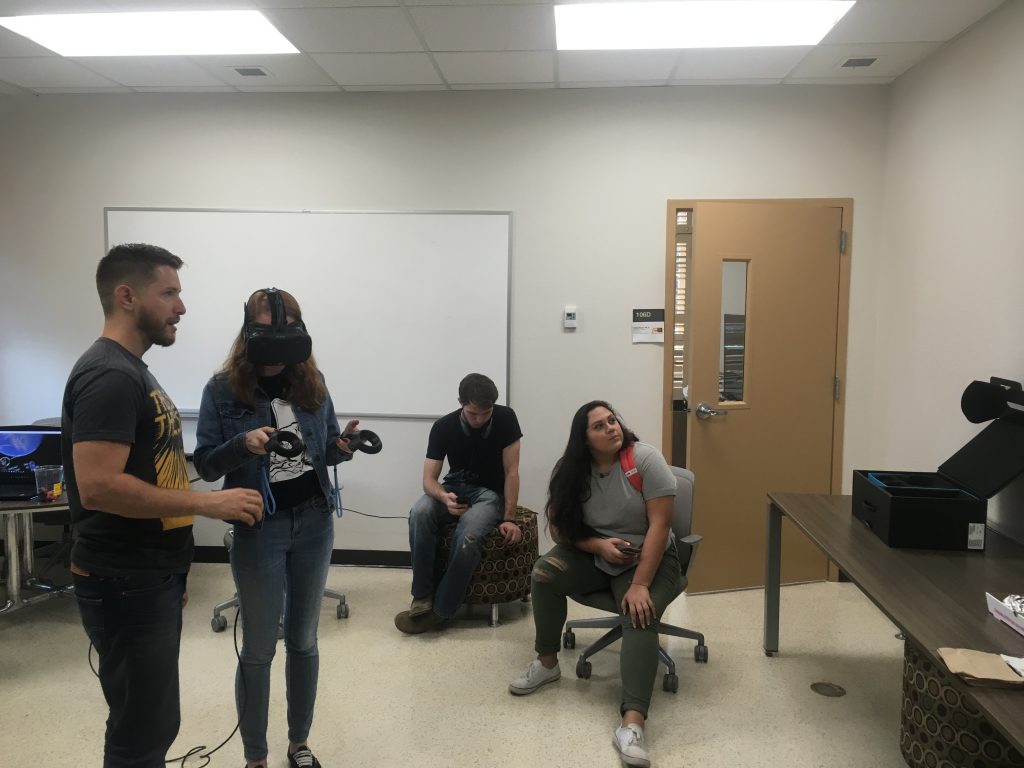 Mass communication students at Texas State signed up for one of two virtual reality workshops held during Mass Comm Week days before the university’s first full-credit virtual reality course will be offered.

Texas State’s School of Journalism and Mass Communication has offered a virtual reality course in the past, but it did not last an entire semester, and only counted for one credit. This spring, 20 students will have the opportunity to meet two days every week for the full semester, earning three elective credits while learning the basics of virtual reality video-making.

The second workshop provided on virtual reality usage during Mass Comm Week was at 9:30 a.m. on Oct. 19. The session filled up with students filling 10-minute slots from morning to noon. The workshop was in two labs in the Old Main building. The first room hosted students looking to try virtual reality goggles like the New York Times Google Cardboard headset and other headsets built to fasten on to heads and hold iPhones and Androids.

“This is the fun stuff, but when you use it to tell stories of places the average person can’t reach, that’s when virtual reality makes its impact,” Smith said.

The other workshop room was run by Jon Zmikly, mass communication lecturer. Zmikly allowed students to try the HTC virtual reality equipment. The tools allowed students to immerse in different programs from Google Earth to a tour of Jerry Seinfeld’s television apartment set.

“These programs help students get started and used to the technology,” Zmikly said. “Overall, the concept is meant for story telling, and to allow them to depict empathy in different ways.”

Zmikly will be teaching the Virtual Reality and 360 Video course in the spring. He said he intends to teach students the basics of using virtual reality techniques, in the hopes they will use them later in their careers to tell impactful stories on serious issues like crime and injustice.

Kayla Swinford, public relations sophomore was one of the first students to attend the event Thursday morning. Swinford used the HTC equipment to virtually travel to her home town of New Braunfels, and San Diego, California one of her favorite cities.

“It was a lot like actually being there because I could look around, which was weird. I would definitely do it again,” Swinford said.

The Virtual Reality and 360 Video course is an elective offered to all students and will be available during registration in the coming weeks.