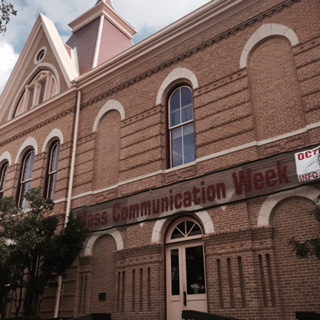 A Demographer’s Relationship with Mass Communication

Some students went to the presentations for class projects like junior Rachel Hudson, an advertising major, who attended for a live tweeting assignment.

“I’m excited to hear what he has to say that’s relative to my field,” Hudson said.

But exactly how does demography apply into mass communications?

“I’m excited because from the communication standpoint, demography looks at how things are now in order to be able to relate them into the future,” Buschhorn said. “It’s really important for us as public relations, journalism and advertising professionals.”

Potter was appointed as Texas State Demographer by Governor Rick Perry in June of 2010. He’s also a Professor of Demography at University of Texas at San Antonio where he serves as Director of the Institute for Demographic and Socioeconomic Research and the Texas State Data Center.

Potter began by stating the two components of population change: natural increase (birth and death) and migration (moving in and moving out). During the 1950s, U.S. population shifts were mainly due to natural increase; however, since the 1970s there has been a growth in migration, particularly in Texas. As the economy continued to grow in Texas, so did the opportunities. 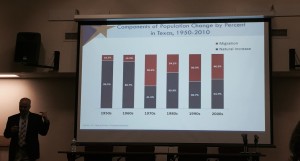 According to Potter, the most significant population distribution in Texas grows along I35 and east. From 2010-2014, the rural counties of Texas have declined in population. This is speculated to be because of the younger generation migrating towards the urbanized opportunity that lies in the east.

He went on to discuss the “population triangle” of Texas which consists of DFW, Austin, and Houston. This is where the job opportunities are.

The population projection for Texas shows there will be an increase of 10 million by 2050. Along with that, the immigration shift in Texas is starting to mimic that of California, about 42% coming from Latin America and 40% from Asia.

From this information, demographers can project a decline in the white (non-Hispanic) population in Texas.

Through this influx of data and context, demographers send trends in Texas to reporters to use for a story. For example, reporter Alexa Ura at the Texas Tribune, has partnered with Potter to generate stories that he says, sometimes lead to a “snowballing effect”.

“It’s key to be able to form those relationships with the right people,” Potter advised.

A reporter can go straight to demographic references for data such as maps, the U.S. Census, or utilize websites like Potter’s, Office of the State Demographer, at http://osd.texas.gov.

Don’t miss out on the other Mass Comm Week events today!