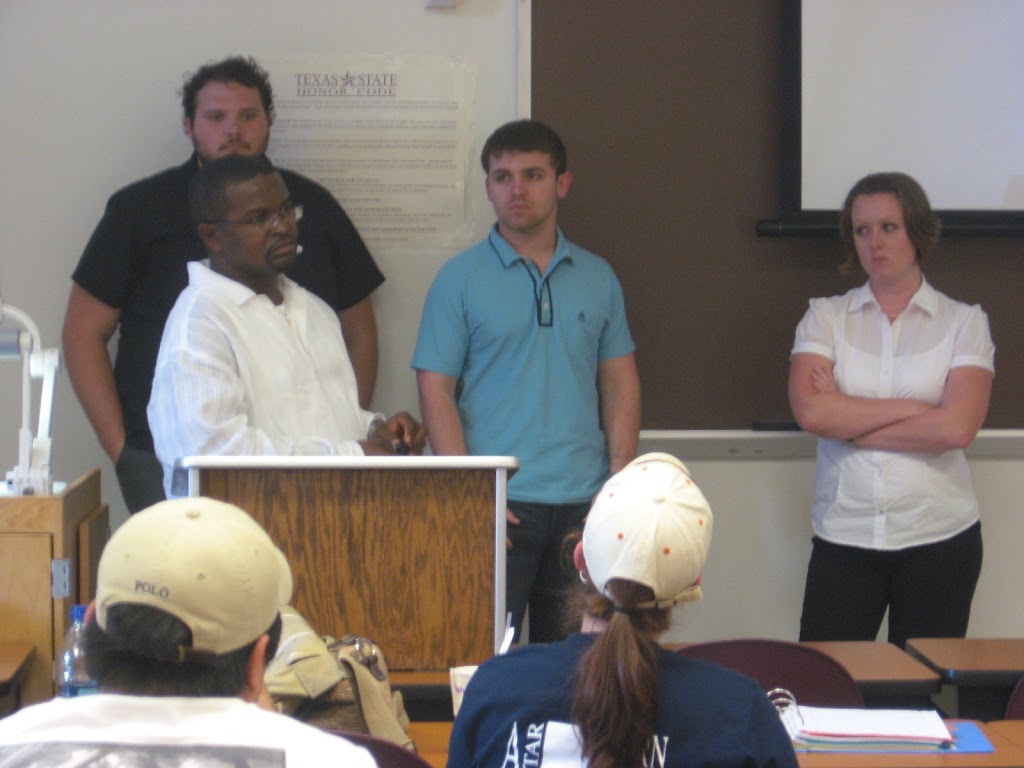 Taking advantage of newest technologies, media coverage on the Rwandan genocide, independent music and advertising, and gender stereotype in newspaper comic strips were the four topics presented in a panel of graduate students.

“The revolution will not be televised, but maybe you can catch on YouTube,” Cherry said.

He said Netwar is a term that utilizes social networks, sophisticated communication technology and a decentralized organizational structure.

Cherry said conflicts used to reflect the war between countries using bombs and artillery. He said conflict is now moving toward a decentralized network, with groups such as al-Qaida and Hamas.

“These are groups that there is no really one nation that unifies them,” Cherry said. “They’re just dispersed in several different countries or regions.”

Cherry said al-Qaida has become a well-known brand with a decentralized network.

“You can take out Osama bin Laden, but the al-Qaida terrorist network will still be able to function,” Cherry said.

He also mentioned the demand for Web 2.0 technologies is increasing social activities. “Twitter and Facebook are really powerful tools for social movement,” Cherry said. “You can organize things so much better, protests, social movements.”

He said these tools help in political and social action.

“I think we should utilize (Twitter and Facebook) and change the world for the better,” Cherry said.

Justin Udomah, mass communication graduate, targeted the media coverage and social responsibility in the Rwandan genocide and examining the legitimacy of advocacy of media practice.

“Apart from just reporting news, do the media have a role to play?” Udomah said.

He researched on the Rwandan genocide because he said life should be respected. Udomah found in his research that the media played a crucial role in the killings.

He said the word genocide was not used. Instead, the media called it tribal war, militia clash or civil war.

Udomah said advocacy should be defined as standing up for something that is wrong and also create awareness of a situation.

Udomah evaluated the media involvement in the crisis. He said 800,000 people were killed in a hundred days in that genocide, but the media lacked to communicate the impact of the news.

Comic strips in newspapers are some people’s favorite section to read. Few would imagine the comics had gender stereotypes.

She said gender stereotypes exist and wanted to research to prove it. Kilpatrick focused on strips with stereotypical behavior.

Some criteria taken in consideration were the placement of the character: at home or at work.

The comments and thoughts made on the character. Other criteria were the activities the characters were participating in.

“Some notable findings we have were that there were more characters that were male in work locations than female,” Kilpatrick said. “They were significantly more female characters shown at home with males, either in the kitchen, at home with the kids.”

Christ Troutman, mass communication graduate, researched on advertising and independent artists. He focused on the idea of advertisers creating ads with mainstream music.

He researched the response of people to brand and independent music. He said there are two pitfalls in using mainstream music.

First, artists sell their right to use their music to corporations. A movement that can upset fans, Troutman said.

“A classic example of this is whenever the Beatles song ‘Revolution’ was used for the Nike ad,” Troutman said.

The second pitfall is some music has a pleasant connotation for bands.

“If someone broke up with you and there’s a song playing in the car of what happened, and you heard that song playing through a Cheetos commercial. You might start crying every time you see Cheetos,” Troutman said.

Advertisers have been using unknown bands because of the pitfalls, he said.