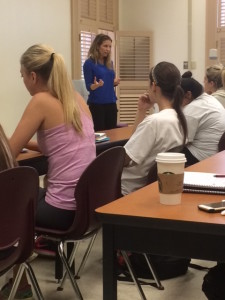 Anne Boyson is a futurist with after the Millennials, who lectured for students at Texas State University as a guest speaker during mass communication week.

Both students and faculty attended the lecture to learn about the different generational patterns and trends that have changed over the years. Austin Clark, advertising major at Texas State, said his teacher recommended the guest speaker to him.

“I came to learn more about how I can keep up with the changes in society, and I really like my teacher who invited me to come” Clark said. “I also receive extra credit in class for attending.”

Anne Boyson graduated with her bachelor’s degree in future studies from the University of Houston. Boyson first began her career in future studies by researching long-term maternal trends, as well as trends of babies and young children. After researching children, she then realized that she wanted to be able to answer the question, how did this generation turn out?

“If you want to grasp the future, you have to understand generational changes” said Boyce. “Any persons experience can become apart of my own research project”.

With a social science and social statistics background, Boyce said that it is extremely important to look at surveys and go back many years to discover generational trends. There are many repetitions of generational behavior in History, or at least similar waves.

It is now the norm that a vast majority of products that the population owns have a sensor in them, and Boyce says that this is how we should be collecting data given we have legal access to the sensors.

“We’re getting into an age where almost everything we have is connected by sensors” said Boyce. “There is a lot of data out there, you just have to find a way to access it”.

Boyce said that there have been certain shifts throughout the different generations, even if just slight. Baby boomers were young children at the height of American growth, right after World War Two. These children, however, grew up questioning the moral overtones of how they were supposed to conduct their lives.

“Baby boomers questioned the truths their parents told them, they set a new agenda and grew up in a modern world,” said Boyce.

For the next wave of babies, generation x, they then became the generation that tested the “new movement”. Boyce said that this generation was caught up in the mix of women’s liberation, both parents working outside of the home and rising divorce rates.

“These children grew up to be helicopter parents,” said Boyce. “People of this generation wanted more structure for their kids”.

The next generation Boyce discussed was the Millenials, who are children of generation x. This generation has been completely exposed to new technology, but we are not yet able to fully see the affect it has had on their lives. Boyce said that you could, however, see how the generation has been affected by the “helicopter parenting” they were raised with.

“Millennials get a trophy for showing up, you get rewarded for being you” said Boyce. “There is a more collectivist attitude than generation x”.

Boyce rapped up her discussion by talking about the youngest of all the generations, generation z. This group also has unique characteristics, some of which seem abnormal considering the mass amount of technology and social media they are exposed too. This generation has been observed to actually value real people more than celebrities, choosing to watch Youtube stars preform DIY skits rather than keep up with the Kardashians.

Autumn Bernhard, junior journalism major, was surprised to find out that generation z is differing from Millennials in this way.

“My main takeaway from Boyce was that generation z does more face to face connection than Millennial,” said Bernhard. “I thought that was awesome and it made me hopeful for the future”.

Boyce will continue to research and find out more about generational trends, as it is constantly changing.

“Reality and social change is so complex that you cannot predict it, you can only envision what it might be,” said Boyce.