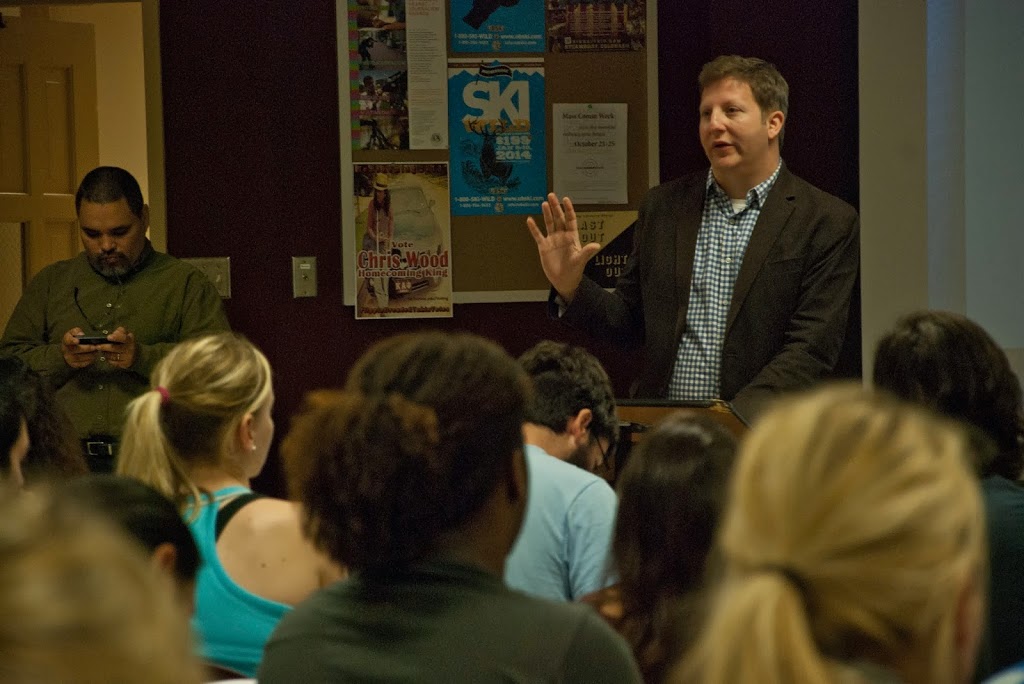 The first of this year’s Mass Comm Week presentations, investigative journalist and author Robert Kolker spoke with students on Oct. 21 at Old Main about his recently published book and offered advice for establishing a successful career in the world of reporting and writing.

Kolker, now a contributing editor for New York Magazine, opened the lecture by recounting his path to becoming a professional journalist.

In 1991, Kolker graduated from Columbia University with a degree in history.
After seven years of work with movie companies, nonprofits, and politicians, he found excitement in the world of reporting, but not from the typically alluring subjects and sources.

“I didn’t want to be a White House reporter, a foreign correspondent or a war reporter,” said Kolker. “What I was learning was that, in the smaller situations, there are human beings bumping up against each other and having drama too. I became interested in that.”

This interest  led Kolker to cover a variety of beats and individuals throughout his career, including the victims of Bernard Madoff’s financial crimes, children of those lost in the Sept. 11 attacks, and the sexual abuse hidden within New York’s Orthodox Jewish community. The most common thread among his work is an examination of the consequences that extraordinary events have for everyday people.

Paralleling his interest in intimate dramas, Kolker’s next topic of discussion focused on his summer publication of “Lost Girls: An Unsolved American Mystery.”

The novel chronicles the true lives of five young women, who fell into the world of prostitution and drug abuse and ultimately died at the hands of an unidentified serial killer. Though the grisly 2008 crime is captivating for its mystery, Kolker explained that the book revolves around the lives of the women just as much as it does their deaths.

“The book becomes a portrait of their lives and the decisions they made,” said Kolker. “It’s about class really. It’s about people from struggling areas, trying to make money any way they could.”

“Lost Girls” also incorporates the emotional struggle of the victims’ families as they come together in an attempt to understand what happened to their loved ones. Kolker described the task of working with the sisters and mothers of the victims as a delicate and complex one for everyone involved.

“Suddenly, these women have been thrust into the spotlight. They never thought they would be in the news,” explained Kolker “Now they have to defend and speak up for this person they loved dearly, but who’s choices were not necessarily the choices they would make. That’s a very complicated thing to try to get across [to readers].”

As Kolker’s presentation winded down, he offered his advice to students interested in entering the same field where he has built such a successful career.

In a particularly poignant moment, Kolker noted that, just like he once did, many students let valuable opportunities pass them by because they are so concerned about the notoriety of employers.

“The lesson I learned a year or two out of college was that the prestige of the place and the name of the place is not as important as the work you’re doing. The process is far more important than the goal.”