A whole new world of PR 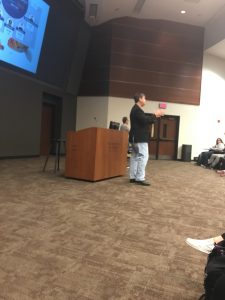 SAN MARCOS — With advancements in technology, the reporting world is changing drastically, and public relations is changing with it.

Social media supersedes the ways in which consumers know and understand all aspects of public relations. Jeff Hahn from Hahn Public in Austin spoke with mass communication majors Wednesday morning at Texas State University on ways in which to adapt to these changes.

Hahn discussed Wordsmith, or as he referred to as “robot reporters”, which are algorithms for writing news articles without any human intervention. He specifically mentioned QuakeBot, a robot reporter that provides updates in real time on earthquake activity in California.

Technologies such as Quakebot, have “killed the Don Draper martini lunch”, and changed the face-to-face aspect of public relations, said Hahn.

One of the best ways for those in the public relations field to stay relevant is to take a brand and turn it into philanthropy for their community. Staying up to date within their community and the events happening within it can lead to better outcomes.

“As you move towards your career, your job is more about content creation than press releases,” said Hahn.

According to Hahn, the average length of a soundbite is 8.95 seconds, and the average attention span of an adult is 8 seconds which is “less than the attention span of a goldfish.” It is challenging to accurately convey messages within such a short period of time, but Hahn advised students that mastering laconic writing is more likely to lead to jobs.

“If you are a laconic writer, I will hire you tomorrow,” said Hahn.

According to the 2016 best and worst jobs, news writing is on the bottom half at number 200, and news reporting is at number 198. A challenge hitting the mass communications field is the turnover rate of journalists moving into public relations.

Hahn attributed the turnover to lack of credibility with news reporting.

“Click bait created the opportunity for revenue to come to media outlets,” said Hahn. “Collusion and corruption are in and around this industry… making it very difficult to build relationships.”

One aspect of public relations that has not changed is the need for persuasion.

“Master those [persuasion] techniques and you’re a Jedi,” said Hahn.