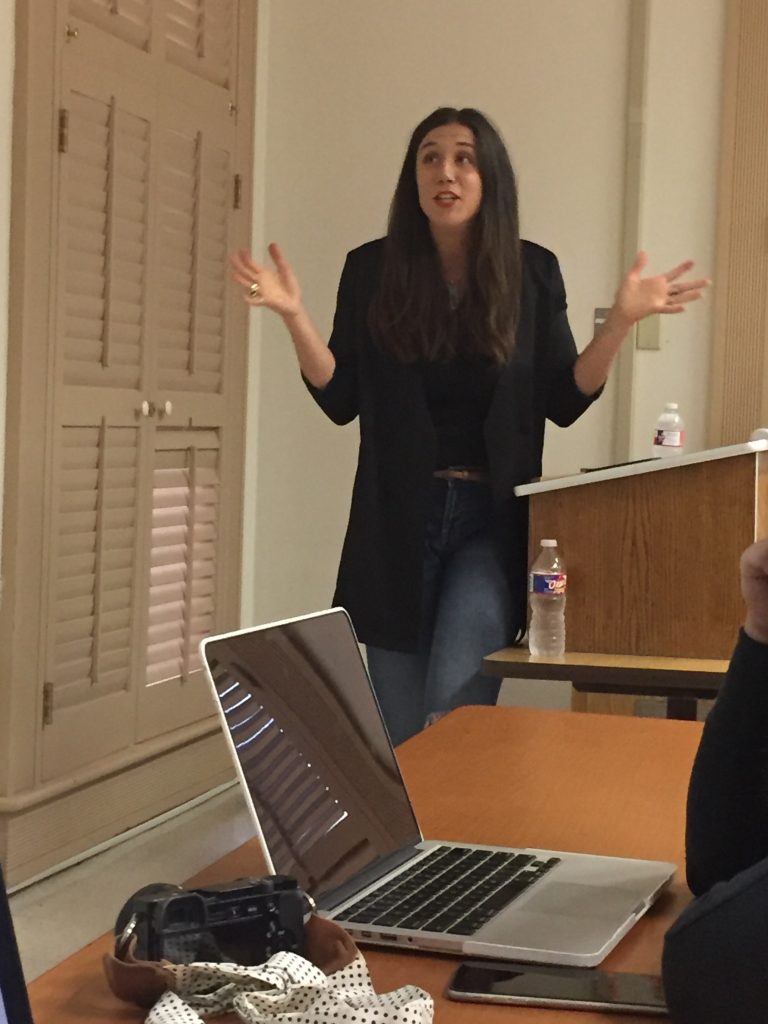 Bureau reporter instructs students on the realities of journalism

SAN MARCOS, Texas – Kathryn Gisi, a reporter for Spectrum News, spoke to mass communication students Monday night about the realities of life as a bureau reporter.

Having graduated Texas State University in 2011, Gisi was able to offer a first-hand perspective on transitioning into the job field. Gisi currently reports on stories in the Hays County area, where she works independently, managing her own camera gear, finding stories and writing her own content.

Gisi describes the job of a bureau reporter as being “off-campus.” The hub of the news outlet is in a different location than the bureau reporter’s beat, allowing, in cases like Gisi’s, for more independence.

While she is happy to have this creative control, this has not always been the case in her career since leaving Texas State.

Gisi got her start at a local newspaper in Boothbay Harbor, Maine, before taking a job in Lawton, Oklahoma. Her biggest piece of advice in regards to job hunting is to be open to any location.

“Go to the towns you’ve never heard of. Go there. They’ll end up being the best times of your life,” Gisi said.

“It’s exciting to learn about what job she does, especially being a woman,” Jennings said.

Gisi spoke about the struggles of being a woman in the mass communication field. She frequently experiences harassment, anger and unkindness. However, she has learned to embrace the challenges and the opportunities it has given her to promote diversity in the field.

Gisi also explained some of the realities and expectations that future journalists should be aware of, like the fact that a career in journalism hardly ever comes with accolades or incentives.

“You’re expected to get the interview and the story every single day. And they usually hate it,” Gisi said. “Welcome the chair spinning around saying ‘what the hell is this?’ That’s a good sign.”

“I think it’s good to see what industry trends are emerging,” James said. “There are so many nuanced fields with other options for career paths.”

James also said that seeing professionals like Gisi speak reinforces the lessons that she tries to teach her students every day.

One of these lessons that Gisi spoke about was the function of journalists in society.

Journalism, according to Gisi, is about providing a platform for others to be heard. She says that journalists have the privilege of hearing what others have to say, and they also have the potential to be a catalyst for change in society.

“It’s about letting people know that other people are awesome,” Gisi said. “A call to action at the end of the day should be your goal.”

Gisi said she does not know where her future career will take her.

“For now, I’ll be here in Texas, hanging out with you guys and telling stories,” Gisi said. “After that, we’ll see.”