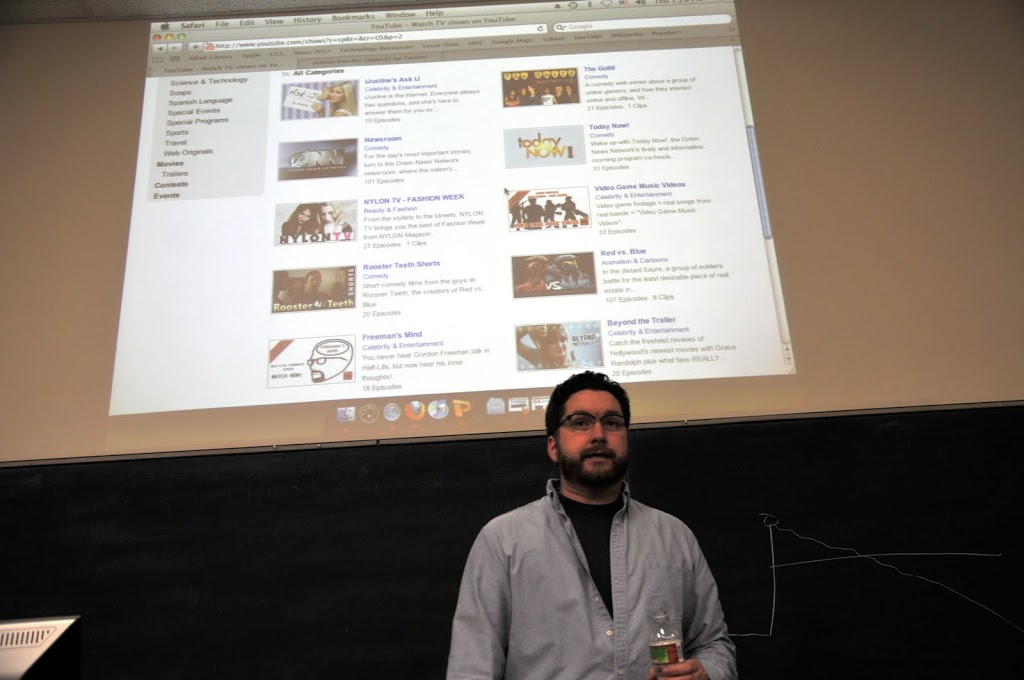 Burnie Burns, founder of Rooster Teeth Productions and University of Texas at Austin Alumni, came to speak to students about how to make online videos work for them during Mass Comm Week.

Burns started off as a pre-med student and now produces a worldwide popular online series called Red vs. Blue.

Burns switched his major because he saw the Internet business as a bigger and more substantial place to grow.

At UT he started to make a 100-minute feature film. He then got into what he calls, “a mountainous world of distribution,” spending the same amount of time making it as he did distributing it.

In 2002 while working at Telenetwork he made a one1-minute Apple parody about a guy switching to Apple for video games, with friends from work. Twenty-four hours after they posted it to their Web site, Drunkgamers, a friend from LA called to tell him he had seen it. “In that moment, it was like the world flattened out,” he said. “Here’s something that we made in an afternoon in 20 minutes and Matt saw it in 24 hours, half way across the country.”

This discovery lead to Red vs. Blue, a Web series that is on its eight season. Burns stressed the necessity of consistency for online space, “If people don’t know where to come back on a regular basis you’ll just loose them.” Their series went from 2,500 views in their first episode to a million in six months.

“Stuff that seems out of reach always works itself to everybody,” Burns said.

Journalism student, Bianca Davis, asked, “For someone that doesn’t have a background in video or technology, in general, what kind of things do you recommend doing?”

He suggested checking out Jake and Amir, a couple of guys on YouTube that just talk to each other. He also recommended looking into handheld cameras with video capabilities, one step up from cellphones, and playing with iMovie or taking advantage of student discounts for software like Final cut.

Last year YouTube was second only to Google, as sites being used as search engines before google bought them. It now has one billion views a day. Red vs. Blue is on its top 20 most watched.

There are a lot of people coming into feature films from the Internet, they self distribute and are self made, said Burns.

Television and cinema are getting nervous by the growing number of online video activity. They are trying to figure out how to change with this new technology and adapt their networks to it.

Burns said the Internet has become a network farm, a place where when something rises to the top, it is picked by a network to run on TV.

Burns advised students have their own Web site. He is against investing so much time on an online identity, using Facebook or Twitter. Even though Ashton Kutcher has over 3 million followers and tweeted about his new movie, “Spread,” it made little over $200,000 in the box office.

1 thought on “Burnie Burns and his Online Video Phenomenon”