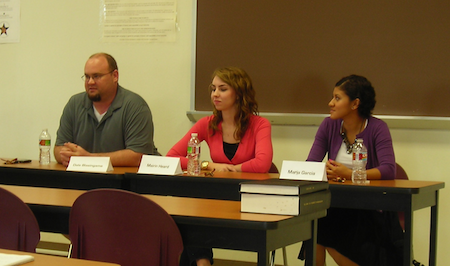 Texas State School of Journalism and Mass Communication graduate students Dale Blasingame, Mairin Heard and Maira Garcia had some valuable insight for undergrads deciding whether or not to continue their education beyond a bachelor’s degree.

Dale Blasingame graduated from Texas State in 1999 and has been a TV news producer for the last ten years, until starting on his master’s degree this semester.

“It was tough. I had a successful career and I could have easily just kept on going in the news business and never blinked. Some of my friends and family were definitely raising their eyebrows,” he said.

Mairin Heard is in her second semester in grad school and is focusing on new media.

She graduated from Texas State in December with a degree in public relations.

“I currently do PR and event planning for a t-shirt screening shop in Austin among other freelance work here and there, while attending grad school,” she said.

Maira Garcia also received her bachelor’s degree from Texas State, in print journalism, and is in her final semester of grad school.

Garcia was editor of the University Star for a full year, as both an undergraduate and a graduate student.

The three students had slightly varying reasons for being in grad school.

“The main reason I’m here is because I want to be a professor, so I had to do at least a master’s and probably a PhD,” Blasingame said.

“I had the opportunity to go to grad school and I think I was too afraid to graduate and get so involved in my career choice and then not go back to school, because I knew I wanted to get a masters degree.”

Garcia, as well as Blasingame, plans to teach at some point in the future: “I’ve always been inspired by teachers that I’ve had growing up and then professors that I’ve had in college. You can just see the impact that they make on their students.”

The panel discussed some of the differences between undergrad and grad school, such as evening classes.

Heard cited the advantage of evening classes for those students who are working full time: “We have plenty of students in our classes that have full time jobs, nine to five or eight to five and then they come straight to San Marcos and go to school. It may seem really difficult, but if you’re good at time management you can make it work and it is worth it.”

“For me, it’s worked out perfectly because I’ve been able to take on different freelance jobs and projects and get to do what I wanted to do during the day and still go to class and get an education at night,” Heard said.

“I think the biggest difference I noticed in the grad program is that the professors see you as their colleagues. They know that if you’re here for a master’s there is a chance you’ll be teaching at some point,” Garcia said.

All three students on the panel were enthusiastic in their recommending of grad school to their undergrad audience. However, their experiences were not without minor setbacks.

“The combination of writing broadcast style, and I’m on twitter so much where you have to condense everything down to one line. I had one paper due that was six pages, which isn’t even all that long and I got to two pages and I was like ‘I’m out, I’m done.’ So that’s been the toughest part for me. Everything else has been pretty seamless,” Blasingame said.