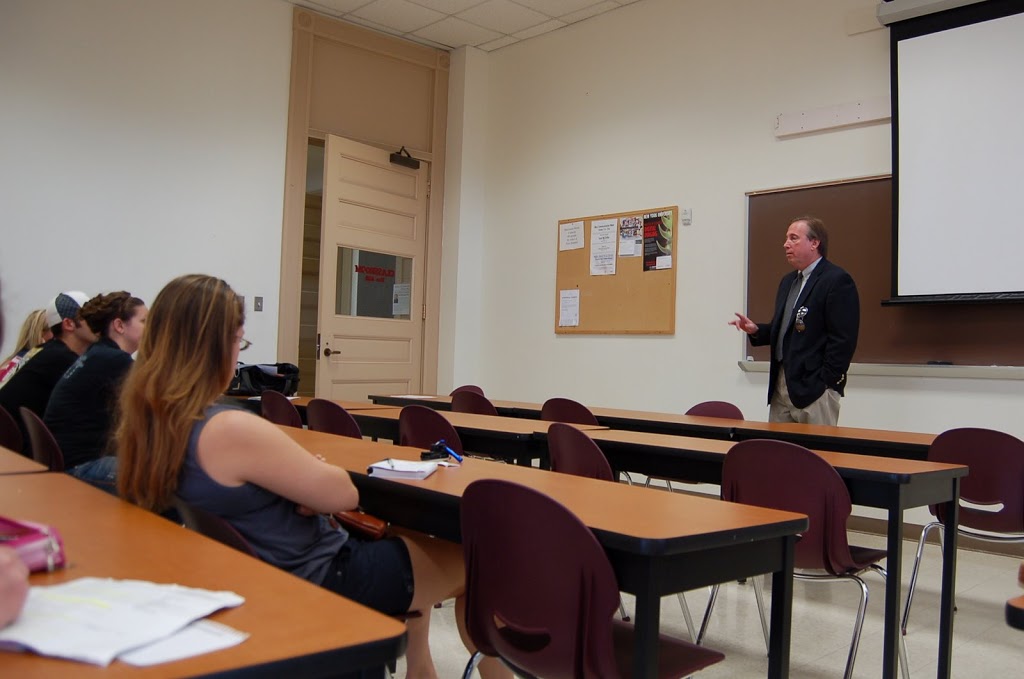 In the past seven years Military Writer Sig Christenson has made the 20-hour flight seven times from San Antonio to the Middle East to cover the Iraq War for the San Antonio Express-News.

The classroom of 18 students and faculty remained quietly intrigued as he let them in on his knowledge and experience as an embedded journalist during Mass Communication Week Tuesday.

Christenson said he pursued journalism because he wanted to have a broad impact on society. He has done so by telling peoples stories, from a close-to-heart story about seven American soldiers, one from San Antonio, killed in a helicopter crash to the Branch Davidian siege in Waco.

As a reporter, Christenson said he not only serves as a writer for a newspaper, but sometimes as an anthropologist, psychologist and historian.

“Your business is to tell people how the world really works,” he said.

Amanda Martinez, pre-mass communication sophomore, said she attended Christenson’s presentation to “get the inside scoop from somebody else’s perspective.”

Christenson’s inside scoop included his perspective on the Iraq War.

“This is the biggest story of our generation and it’s hardly being covered,” Christenson said. “We’re the only regional paper that does this.”

He said in 2006 there were only nine embedded journalists covering the Iraq War, and 11 or 12 were there when he returned to Iraq this September.

Christenson said being a military reporter is not a glamorous job, revealing after the presentation that during one of his first stays in Iraq he did not shower for about seven weeks. He said he had to shave his head of dirt-covered hair and found black in his ears after his first bath.

He said in an e-mail that during his first trip with the 1st Cavalry Division’s 1st Brigade in October 2003, he spent most of 10 days in Kuwait’s desert.

“That was a good example of an unglamorous trip – I fell ill with a bad cold while there and contracted pneumonia when I came home,” he said.

During a Q and A with his audience, Christenson said the Iraqi Army and police are better than they were a year ago, but these forces are being built from scratch.

“Most of the teenage population isn’t on the streets, they’re in the army. It’s the only place they can get a job,” he said. “We’re going to be there longer than people want.”

Christenson said there is no way U.S. forces will be out of Iraq in two years despite what presidential candidates say. Referring to his recent blog about Dr. Muayad Hamad’s request for U.S. forces to remain in Iraq for another 12 years, he said he does not think it will take that long.

As a military beat reporter, Christenson said it is important to form inside relationships and connections, and to do that you have to be accurate.

“Get stories straight and then they’ll begin to trust you,” he said.

He said there is a great deal of pressure from your bosses and from the Army as an embedded journalist, which makes being a military writer very stressful.

“I’m under surveillance all the time and that is a new level of stress,” Christenson said. “In the fifth year of war you’ve got a lot of pressure.”

He said the pressure comes from the Army trying to spin things in a certain direction or soften stories.

“I firmly believe it is our job to write about what we hear, see and know,” Christenson said in an e-mail. “People don’t have to like that, but it is our mission as journalists.”

He said if people demand more “good news” stories in Iraq, they should be told that all news gravitates to the negative side and good news isn’t always easy to find in a war zone where people are killing each other.

“The first day or so in Iraq, during the invasion, I was reminded that now it not only was legal to kill and to be killed, but that governments on both sides gave awards to people for doing both,” Christenson said. “Good luck finding the good news in death!”

Christenson said even all the trouble it takes to be an embedded journalist, and there is a lot of trouble, it is ultimately worth it.