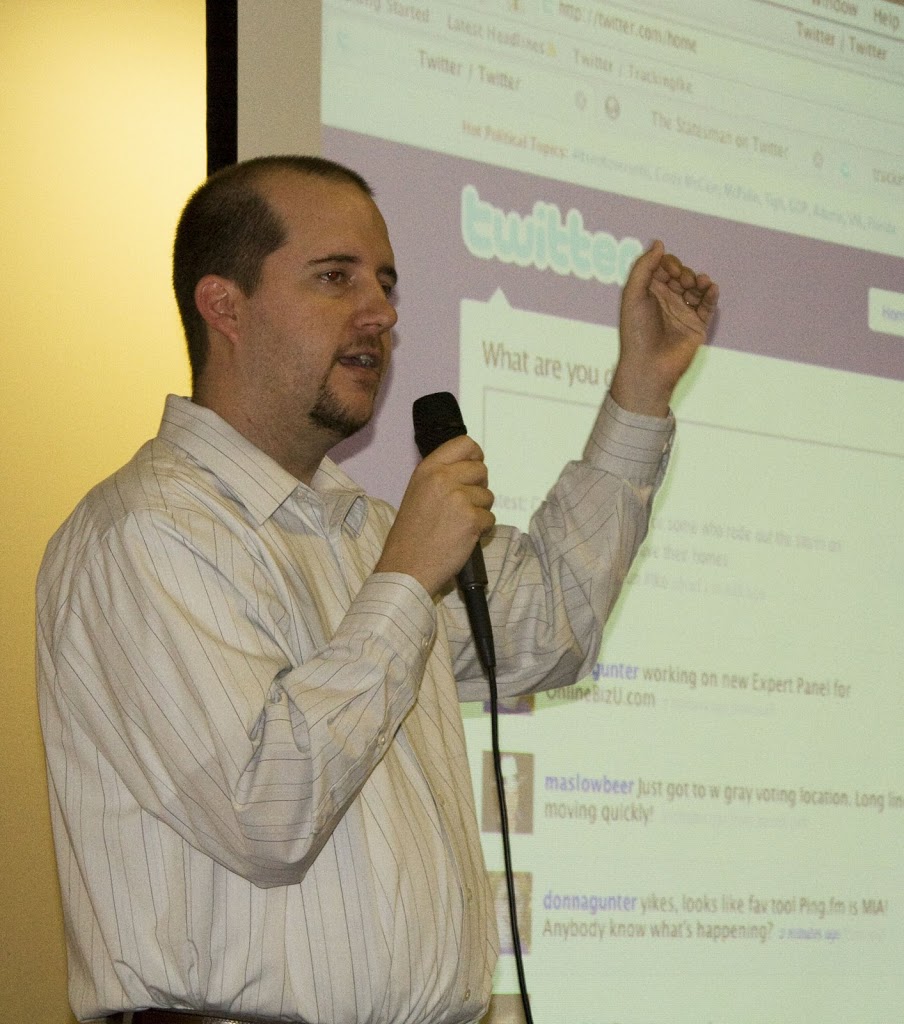 Twittering the News with Robert Quigley and Tony Plohetski

New media is all around us. The internet delivers a consistent influx of new software, widgets and social networking tools that are in a constant state of fad and fin.

As part of Mass Comm week at Old Main, Robert Quigley, internet editor at The Austin American Statesman, and Tony Plohetski, Statesman staff writer, talked about their use, and self-proclaimed addiction to a new social networking fad Twitter.com.

The site was designed to allow anybody to “tweet” about their lives from the computer or their cell phone with a 140 character limit. Journalists have recently made use of this new media to tweet about the news.

Quigley, skeptical at first, started using Twitter in March. The big puffy font and cheesy name did not impress him. None-the-less, he was addicted within a week. He has been the driving force (and voice) behind the Statesman’s twitter.

“It is just a great tool for doing our job,” Quigley said.

He uses it to get story ideas, promote big articles and get feedback from his followers. Twitter, similar to myspace and facebook, puts you in touch with other twitter users. If you think someone’s tweets are funny, informative or interesting you can follow that person and receive their tweets online or via cell phone the instant they post them. The Statesman Twitter now has more than 1,900 followers.

Recently Quigley and Plohetski had great success using twitter covering Hurricane Ike. Just before reporters and photographers were sent to Corpus Christie to cover Ike, Quigley set up a special Twitter account called “TrackingIke” and showed the field crew how to use it. Among them was Plohetski.

“I was somewhat skeptical about the device at first,” Plohetski said. “But now I am very much into it.” Plohetski and his crew sent several tweets via cell phone and laptop during their trip. When they got to Houston while the storm was raging outside they were still at it.

The next day as they were surveying the damage, they learned that they were the only source of news for several Houston residents as power in most of the city was out. Residents were receiving the tweets with their cell phone. They were even asking questions of the reporters and getting answers back.

“One of the most gratifying experiences was the interaction we were having with our readers,” said Plohetski.

While it may not be the most conventional way of reporting, it was the perfect medium for discussing and reporting a disaster situation Quigley and Plohetski concluded.

In keeping with new technologies, the entire speech was live streamed to this blog. If you missed the session and want to watch it in its entirety, scroll down to replay it.