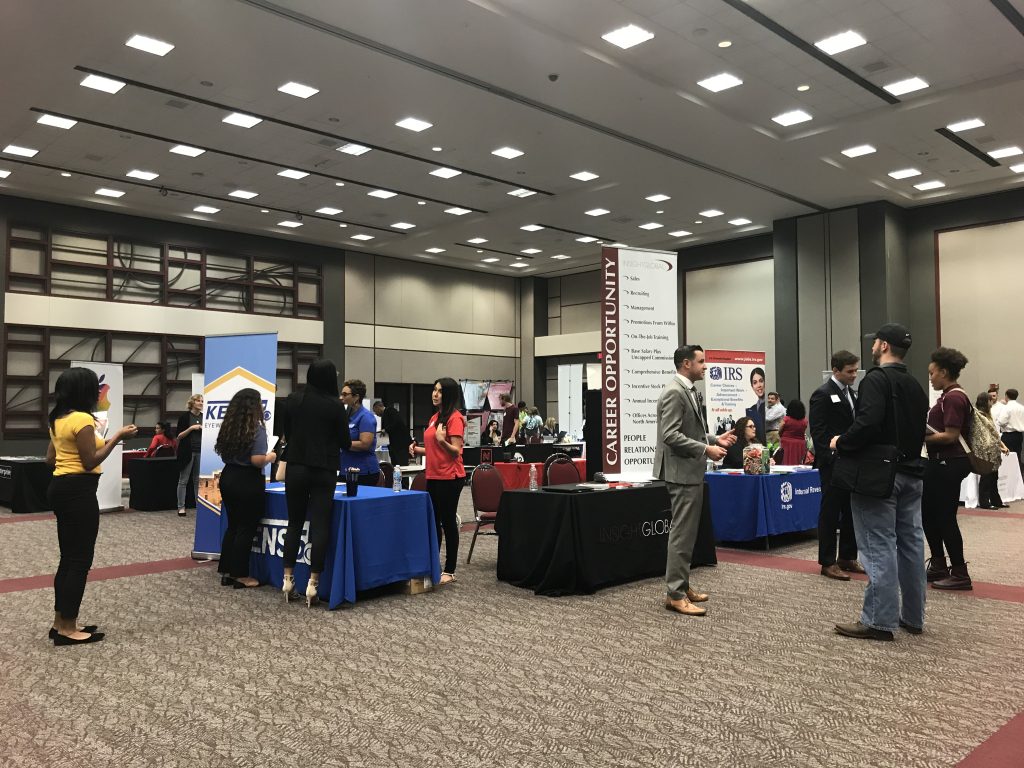 With resumes in hand, students filed into the LBJ Ballroom where several companies set up booths filled with flyers and goodies in hopes of finding their newest intern or full-time employee.

Every year during Mass Comm Week, Career Services hosts the Mass Communication Career Fair. People from a variety of businesses and companies set up shop in the LBJ Student Center Ballroom. These companies sought out students with specific skills to fill the empty spots in their internships and job positions.

Human resources and payroll manager of Ennis Communications Marla Jamali said the company has hired students from Texas State University in the past. As part of the radio business, she said she looked for students who could not only come in with a positive attitude, but also had practical computer skills.

“Understand Microsoft Office,” Jamali said. “You don’t have to be a guru, but be proficient in it so when we tell you, we want a spreadsheet with this information on it, you know how to get in there and do it.”

Shasha McCracken, the director of Mo-Ranch Summer Camp, was looking for a videographer and photographer for the upcoming camping season. She said she didn’t know much about what specific skills were wanted, but said that people looking to come into a job where young people were involved required special interpersonal skills.

Drake Jakovitz of Crowdstrike, a cybersecurity company, said they were there hiring people for positions in sales and marketing. He said he did not want people who pride themselves on knowing everything, wanting people who weren’t afraid to learn.

“Just, in general, we are looking for smart people,” Jakovitz said. “We want people that come in and aren’t know-it-alls, but want to be learn-it-alls because a lot of people, especially in our industry, don’t know how we do what we do. We’re pretty new technology and pretty cutting edge.”

As the event continued, several students stopped by. One of those students was Kasey Turner, a digital media innovation senior. She said she was not prepared for the event. Dressed in casual clothes, Turner said she was not expecting the level of formality that the event was asking for.

“It being my first one, I didn’t really have an idea of what to wear and what to bring,” Tuner said. “I’m still tweaking my resume so I didn’t have my resume on hand like so many other people had so I was little unprepared with my resume, but I was definitely hoping it was more of a casual meet and greet kind of thing.”

Another student, Javier Chapa, a general mass communications freshman, said he was glad he came to the career fair as it would better prepare him for the future when he would be looking for internships. He said that he would be looking into the help offered by Career Services to help build his resume.

“I didn’t know it was going to be a lot of booths and a lot of people walking around,” Chapa said. “I didn’t expect so many people to be dressed up. I felt a little underdressed, but it was mostly what I expected.”

Students who missed out on the career fair can prepare for next year by visiting Career Services on the fifth floor of the LBJ Student Center.

Career Services can help with creating resumes, interview skills and even provide suitable business wear for students who do not have them. Jobs4Cats also provides listings for jobs and internships that are open to Texas State students.